Tasting a whisky from a closed distillery is often a very interesting and rare moment.

This is the case today with this whisky from Speyside CAPERDONICH 18 years old from Ian Macleod.

Before tasting it, let's take an interest in the distillery (or at least the ex). We are in Rothes (in the middle of the speyside) in 1898 and a new distillery is opened next to the one of Glen Grant which became too small (it will be called GLEN GRANT # 2 until 1965). The Scotch whisky crisis went through this and it closed after only 4 years of existence in 1902. These two stills remained awake until 1965, when it reopened its doors, rebuilt by GLENLIVET. At that time a British law prohibited two distilleries from having the same name (??!!!!) and GLEN GRANT #2 gave way to CARDONICH.

The distillery then quietly produced its whisky (intended for blends such as CHIVAS REGAL) in its two (and later 4) Charente stills, passing from owner to owner. The last of them (PERNOD RICARD zut a Frenchman) decided to close its doors permanently and dismantle it in 2002 (definitely year 2 of each century was not a good time for it). 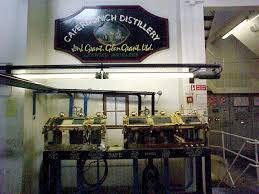 In short, CAPERDONICH bottles are rare.

Let us return to the one we are interested in today. An 18-year-old aged by Ian Macleod as part of his Chieftain's range, it is bottled at 48°.

This whisky was distilled in 1995, then remained for 18 years, a good part of which was in 4 small hogshead barrels previously containing sherry. Passed by small barrels there will be only 1016 bottles.

Luckily one passed in front of my nose.

The liquid that flowed into my glass was a beautiful dark amber colour (due to a long period in sherry casks).

On the nose, before seeing the impact of sherry, it is first of all the distillery's signature notes (wrongly considered as second-rate when it was producing) that appear: sweet, light, and slightly aggressive aromas of flowers and green apple. We are clearly on the freshness (while sherry finishes are often ahead of others as if they wanted to get out of the glass first). But make no mistake about it, the impact of sherry is very present when the nose plunges into the glass. The result is a gourmet pastry aroma of pear/chocolate cake. These notes then give way to new fresh notes of citrus fruits! I would describe this whisky as a very pretty nose, not very aggressive (despite the 48 °). It makes the senses travel.

In the mouth the sensation is quite different. Let him travel there for the necessary 19 seconds. It will go through the front of your mouth and deposit frankly spicy notes, almost spicy like ginger, to wedge and then roll up against your palate to give it the softness and warmth of an apple, walnut and honey cake, before finally attacking powerfully the back of your mouth with spicy notes almost spiced up.

Its olfactory feedback is very interesting because it is divided in two. The softness of the apples remains stuck to the throat for a while. But the surprise is in the nose where fresh and distinctly spicy notes run away! Nice feeling!

As I told you, tasting a distillate from a disappeared distillery (and not about to reappear as it is because it was dismantled in 2011) always remains a special moment. And when the distillate in question is clearly up to the task, it is clearly a good time for the amateur.