To taste this whisky, I suggest you go to the west coast of Arran Island where it was distilled. To do this, I put on my boots and go directly to the marshy territories of the center of the island, surrounded by hills in the shade of the famous stone circles of Machrie moor.

The sun shines (if, if), I find a dry place and get under the shade of one of the stones planted here by the Fingal Giant, in honour of his comrades who fell during the battle against the Vikings! In this place steeped in history, I think of this battle and the causeway of the giants that this sacred Fin had built between Ireland and Scotland to fight against Bennandoner (probably because of a banal story with Fin's wife during an evening drunk with whisky and whiskey -NDR-), another of his giant friends. Roadway destroyed by the same boyfriend when he came home losing at home! But all these thoughts must not divert me from my primary mission: to enjoy a perfect whisky in a suitable place.

I draw my glencairn and unblock the mysterious flocked bottle of dog Bran. When the liquid flows into the glass it appears straw yellow, announcing a stay in a bourbon barrel.

The smells that emanate from the glass are first turned towards freshness and floral smells. I take a breath again as I look at the stones in front of me and plunge my nose into the glass. I now find there the smoky aromas announced by this Arran made from barley grain dried with peat to reach a level of 20 ppm (pretty and sweet). A third passage of my nose in the glass announces citrus fruits and perhaps even tropical fruits. Nice introduction. Now it is time for a tasting.

As I prepare to taste this sweet beverage, I hear a barking without paying attention to it. The announced peat is not directly present because it is first of all feelings of fruit, citrus fruits almost of almond. As I pass the liquid through the corners of my mouth, the earth begins to shake under me. It was just then that the peat exploded in my mouth as if a clod of stuffing that was blocking the chimney had suddenly come out. Wow, it's only 20 ppm? My eye! What an effect that makes me waver before giving way to a few pineapple and almond flavours.

I turn around and see (and especially feel with the tremors) a Fingal appear in the distance with his faithful Bran. Barely do I have time to hide behind a thicket, when long aromas of peat and citrus come back into my throat.

It is thus hidden that I see the giant throwing his dog's chain around the stone where I was two seconds earlier. Afraid of being flushed out by the smells of the peat in my glass, I throw a few drops of water into it. Telling myself that it would be a sin not to test with water, I drank my glass again to discover white chocolate flavours.

Knowing that the wait will be long, I look at my bottle to refill myself and see by rotating it that the chain at the blow of the dog is bound on a rock! Maybe I should have been careful of the famous legends!

In any case, the day you pass by Arran Island, a piece of advice but not in the shade of one of the erected stones of the Macchrie Moor circle! 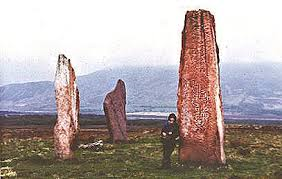