How can you imagine a 17th of March (and St Patrick's Day) without a visit to Ireland.

We will discover the DINGLE distillery and taste the DINGLE SMALL BATCH N°6.

When on board Brad Peat I enter the town of Dingle (Daingean Uí Chúis in Irish) I am especially amazed by the colours of the houses. The yellow, the green, the pink, the red... stand out on the blue sky (yes they do). No way to go through the city without visiting the various shops. As a music lover, I went to the Dingle record shop.

But don't get me wrong, that's not why I'm here.

I'm here for an industrial building in the Milltown area at the end of the harbour.

When I switch off the van's backfire engine, I find myself in front of a pile of barrels blackened by the rain and the sea spray and certainly a few litres of whiskey, topped by the distillery's logo and name!

I think about what Christophe Coldorak (@coldorak) of the "Rennes Whisky Club" and the moredramslessdrama.com web site, great connoisseur of the distillery told me.

He told me that the history of the distillery started as for the whisky, with a beer story!

He told me that in 1983, Oliver Hughes, Liam LaHart and Peter Mosley opened a microbrewery, Harty's Brewery in Wicklow, south of Dublin, with the objective to propose at first "normal" beers, but then more and more offbeat beers under the name of Porterhouse brewing. In 1998, their beer was even voted "best stout in the world".

In 2012, Oliver Hughes decided to open a distillery here in Dingle on the site of an old sawmill. 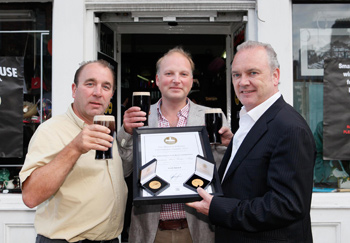 This was the beginning of DINGLE whiskey, and in 2015, the first distillates (produced with water from the distillery's well, barley mashed by hand and fermented in wooden vats and distilled three times in custom-made stills) came out of the first bourbon barrels.

As this first adventure was to be shared, the first casks were returned to 500 "founding fathers (and financiers)" with each one given the choice to take it out of the cask whenever and for whomever they wished. Each cask aged on site bears the name of its owner.

Christophe told me that the objective of the DINGLE distillery was to make very good whiskey in order to stand out from the big Irish distilleries. It was necessary to find casks of all origins (we will see that this is the case) and above all to hire a reference to blend the distillate which was going to come out of them (it had to come from abroad).

And it is to Graham Coull, "master distiller" in charge of the taste since 2019, that the distillery turned and with whom I had an appointment today. The man looks like a rugby player from the shamrock team (more like the thistle team as he is Scottish) comes to welcome me in front of the distillery.

A reference? well when you have worked for William Grant & Sons, been distillation manager at Glenfiddich, Balvenie and Kininvie, and master distiller at Glen Moray, to say the least.

So it is with him that I visit the distillery, passing in front of the three stills and especially the numerous casks stored here and there.

It is in this direction that we go to taste the famous DINGLE SMALL BATCH N°6.

On the way there, he tells me about the main range of the distillery, with single malt and single pot still, but with different ageings from the Irish habits and customs (and largely inspired by the Scottish single malt).

Of course, there is the reference DINGLE SINGLE MALT born from a blend of whiskey aged in bourbon casks but especially in Pedro Ximenez sherry casks.

But alongside this leader, there is also a series of Single Pot Stills (a mixture of malted and unmalted barley).

This whiskey is offered in different batches, which are the occasion to see the extent of the ageing of the distillery. The first one of the series has been aged only in Pedro Ximenez casks. The second one was aged in bourbon, Oloroso & Pedro Ximenez casks. The third was a blend of bourbon and port casks. Finally the fourth in the series aged in ex-bourbon and ex-Oloroso sherry casks. Each with a well-defined aromatic palette.

This is the same principle that has been retained since 2016 for the series of which we are going to taste the 6th copy today.

With a range split into a single malt version and a cask strenght version:

In order, he explains to me that we find:

- And finally, Batch 6, which we are about to taste, has been aged in port casks only (single malt and cask strength).

And it is indeed a glass of this batch 6 that Graham hands me. It contains an amber coloured distillate with some orange and sometimes almost pink reflections, indicative of the ageing in port casks.

The nose of this distillate, with 46.5% ABV, is very sweet and starts out with a sweet orange jam. We can guess some spices behind but very discreet.

On the second pass the spices are a little more present but drown in the sweetness of the hot caramel, lifting the nose a little from the glass. It also reveals a woody character.

On the third pass, it conceals more woody and vinous notes from the Tawny Port cask from which it is made.

In the palm of the hand, the place is given to cereals which betray its Irish origin.

At first, the palate is soft and sweet with a big sensation of ripe red fruits.

But this does not last. It becomes very lively with citrus fruits more present than on the nose. Similarly, the spices are much more pronounced than on the nose. We are clearly going towards a sensation of pepper and ginger. Then the fire calms down and the distillate becomes thicker and even rather pastry-like. But don't be fooled by the occasional lemony lift that tickles your cheeks, even if the end of the tasting is generally sweet.

The descent is lively and leaves woody notes in the throat. The finish is quite long with some spices lurking and the sweetness of honey.

The empty glass keeps the after-effects of the spices at first, accompanied by the freshness of a lemon juice, and in the long run will finally let the caramel that the nose had unsealed melt away, as well as the coffee aroma.

Graham takes a bottle of this Batch 6 in Cask strength and tells me to take him on board BRAD PEAT to go and drink it on the steep coast of the end of the peninsula. He tells me that in good weather (like today), with a glass of this distillate (60.4% ABV), you can almost see the American coast.  But that's another story!