I remember that cool autumn morning when we set off with my father-in-law (whom we will call Papilou here for anonymity as no one knows him by that name) from Aberdeen on board BRAD PEAT, heading south towards the foothills of the Cairngorms and their salmon rivers.

As the morning fog was like daylight, rising, we landed on the banks of the North Esk not far from the Gannochy Bridge. It seemed like the perfect place to see if we could see what 'fishing in Scotland' meant.

But I also had an ulterior motive. Not far away, a little further north, was the small village of just over 200 souls of FETTERCAIRN and above all a distillery bearing the same name. I wanted to show Papilou the curiosity of this distillery and if possible let him taste the 16 year old.

So we left BRAD PEAT on the side of the road near the rocks of solitude and went into the forest. We soon arrived in this almost original landscape that our renter in Aberdeen had indicated to us and which was intended to shelter our fishing trip.

The first discussions of course concerned the colour of the flies to be used: rather dark, rather light? Papilou, as a great connoisseur, told me that nothing beats the real fly by showing me a beautiful specimen he had just recovered.

As the fog became less and less thicker on the river, a nice 2 hour fishing trip in the middle of the forest followed with only the sound of the stream and the leaves starting to yellow on the trees.

In the end, only one catch, but a nice catch with a magnificent salmon of 2,7 kg which of course was caught with a real fly of course (I know about whisky but fishing... and moreover with a pro).

Having returned the salmon to its crystal clear waters, we returned to BRAD PEAT and I told Papilou that it was inconceivable to return to Aberdeen without seeing the still at FETTERCAIRN.

So we headed north and reached the village in less than 10 minutes. We arrived in front of the white buildings of one of the oldest official distilleries in Scotland.

Indeed, I explained to Papilou that it had been created in 1824 by Sir Alexander Ramsay (chief of the clan of the same name) and that it was the second in Scotland to obtain a distillation licence (after THE GLENLIVET -NDLR-). In front of the facade of one of the buildings, Papilou said to me: "there are unicorns in the corner? ». Who knows maybe we are in Scotland. I nevertheless explained to him that we haven't seen any here for a long time and especially that the symbol on the brand crest was simply taken from that of the RAMSAY clan.

Like any good Scottish distillery, we were able to admire the beautiful pagoda roof of the kiln of this distillery which has managed to go through the ages without ever closing its doors (hardly a small dormancy before the Second World War). On the other hand, a distillery which has known several owners such as the GLANSTRONE clan (who bought it from the RAMSAY 5 years after opening), The GLENLIVET and closer to us WHYTE and MACKAY in 1973 (still owner and its emblematic master blender RICHARD PATERSON).

In short here, when we talk about whisky, we know what we're talking about.

Before giving Papilou a taste of the 16 year old, I wanted to show him the still room of the ditillerie. Ok, a still room, whatever its shape, it's still a still room. However, here it is unique because it encloses a still that is unique in the world as well.

Indeed, one of its 4 stills has been modified in the 50's to produce a finer distillate. The system is simple (we still had to think about it) and consists in letting fresh water (coming from the neighbouring rivers and also used for the production of the distillates - Editor's note-) flow along the neck of the still in order to create an additional condensation and to let only the lightest (and purest) vapours rise. In short, a unique piece, recognizable by the oxidation of its top. 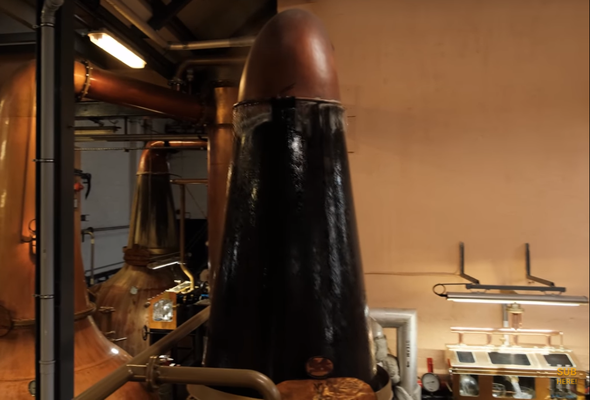 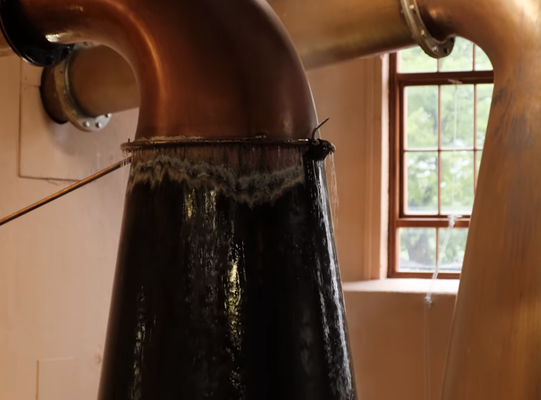 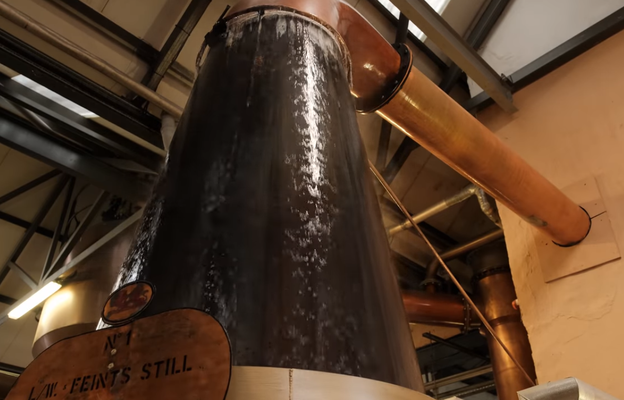 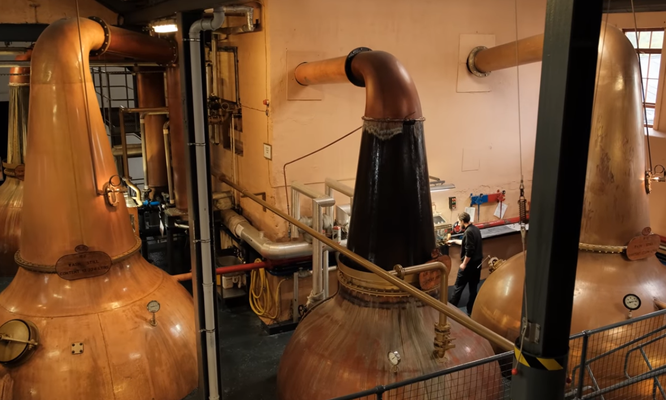 While walking through the buildings we come across Stewart Walker, the manager of the distillery. I tell him about our morning fishing trip, listen to the story of his best in the area, and explain to him that I would like to give my father-in-law a taste of the magnificent 16 year old.

He willingly accepts and takes us to one of the many warehouses of the distillery, just to let us taste it "in situ"!

As he serves us a beautiful amber liquid in the glasses, he takes the opportunity to explain to us how this 16 year old was aged: 15 years spent in American oak barrels that had contained bourbon before being split in two for a one-year trip to the Iberian Peninsula: half in a Spanish barrel of Sherry OLOROSO and half in a Portuguese barrel of PORTO. It is one of the few in the range to experience multiple aging (we will come back to this later).

He also explains to us, that in addition to having passed through the famous still, this whisky is the result of a distillation of a "chocolate malt" (a process that dries the barley by roasting and makes it brown and even more fruity).

Bref, a magnificent menu which announces a sweet and fruity whisky to our liking!

What is it really about? So we embarked on a nice tasting.

Our noses discovered a very fruity whisky (a real cornucopia of ripe fruit) but also very sweet. It wasn't aggressive despite its 46.4% alcohol content and the first smells almost lingered at the bottom of the glass (perhaps that's the effect of the lightness of the distillation method). Before taking the nose out of the glass our noses nevertheless discovered a vinous hint (certainly coming from the finishing casks).

At the second passage the aromas remained warm and now focused on a white peach, then insisting on a lemony and even spicy touch.

The third passage was definitely about heat and sugar with the arrival of beautiful vanilla and chocolate notes.

Stewart gave us the signal with his now customary "Slainte mhath".

On the palate, the very fruity and warm character of the distillate was confirmed. The beautiful presence of ripe and tasty fruit was accompanied by spices that came to stick on the tongue to stay there for the whole tasting.

During the 16 seconds necessary to detect all the aromas present, we had vanilla, a hint of harshness linked to the last barrels used, but above all beautiful fruity aromas. After a few seconds, a peppery hint made a furtive appearance to finally leave a great deal of room for pineapple and vanilla notes. It was the latter that ended the tasting with broad pastry notes. However, the peppery note that clung to the tip of the tongue as best it could so as not to be swept away by the softness and smoothness.

The finish was relatively long and signed sherry with warmth, a hint of ginger and a taste of roasting (in addition to that of not enough which accompanies all tastings). In the margin I remember the hint of harshness that stuck to the tongue.

Before saying goodbye to him, our host introduced us to all the brand's achievements: 12 year old, 22 year old and 28 year old (all three aged in bourbon casks) but also the honourable 40 year old and 46 year old distilled in the 70's and aged respectively in Apostoles sherry and Tawny port casks in addition to their long ageing in bourbon casks. I keep under silence the more than honourable 50 years old that costs more than my BRAD PEAT (normal it is my age -NDLR-)!

After having tasted them all (but I'm not telling you!!!) we went back up to our 50 year old FETTERCAIRN (sorry Combi) and we set off again in the direction of Aberdeen towards new adventures with the memory of a beautiful fishing trip and a nice tasting.