What is it? Single malts in the US? And peaty too? It doesn't take much more for me, as a good PEATDREAM, not to go there!

Yes I know, some will say, single malt is Scottish! But we produce it in France, so why shouldn't we have some in Uncle Sam's country on the other side of the Atlantic !

So here I am in my trusty BRAD PEAT for another jump across the time zones, heading due west.

Before leaving for the American adventure, I pick up the man who will be my guide, Florian Pflieger, from the high ice. He is the commercial manager for the spirits of Remy Cointreau (owner of WESTLAND since 2017) and a fine connoisseur of whiskies.

A snap of the fingers and here we are on the north-west coast of the United States in Seattle to visit the place where single malt arrives in the United States: the WESTLAND distillery. Today, we will taste its AMERICAN SINGLE MALT PEATED.

Arriving in Washington State near the Emerald City, I suggest we push the cliché to the max (we don't get to Seattle that often), and throw on an Eddie Vedder album to accompany us on this whole discovery. So, I suggest you do the same by connecting to the wonderful album (one of my favourites) Into The Wild.

To the sound of "Setting Forth" we arrive in the centre of the city on the shores of Elliot Bay at the bottom of the Salish Sea (the border with Canada). We are not in the middle of fields, but in an industrial area. Not far away is the Silver Platters record shop with a large picture of Chris Cornel! This is SEATTLE, the place of world rock. Just next to the shop, another big building displays WESTLAND DISTILLERY in big letters ! Here we are.

It is here that in 2010, Matt Hofmann and Emerson Lamb created the distillery that was going to kick-start the bourbon whiskey industry by offering single malt (100% malted barley as it is already done in Europe).

As "No Ceiling" was being launched, we were greeted by a friendly bearded man with a lumberjack look: Matt Hofmann. He's the one we're going to meet today and he'll be our guide.

He looks at us and says " Eddie Vedder, he's a good guy ! Welcome Seattle!"

Without delay a question arises: Why make a single malt when the new world swears by Bourbon, Rye or any other kind of corn whiskey?

In fact, Matt explains that this is not only because of the training he received while doing his Masters at Heriot Watt University in Edinburgh, but also because of the great climatic similarities between the Scottish seaside and the North American Pacific seaside (in the cold, constant humidity). He also explains that the region has large forests for barrel making, large areas of barley cultivation and benefits from the pure, crystal clear water (Cedar River Watershed) from the East Peak just an hour and a half away.

Finally, he tells us that there are beautiful millennial bogs in the area.

All the necessary ingredients to produce a beautiful single malt. 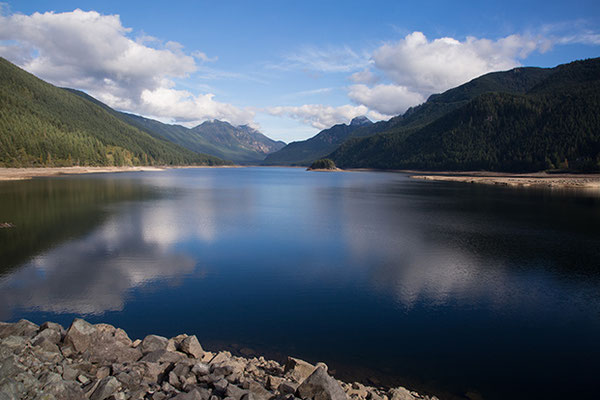 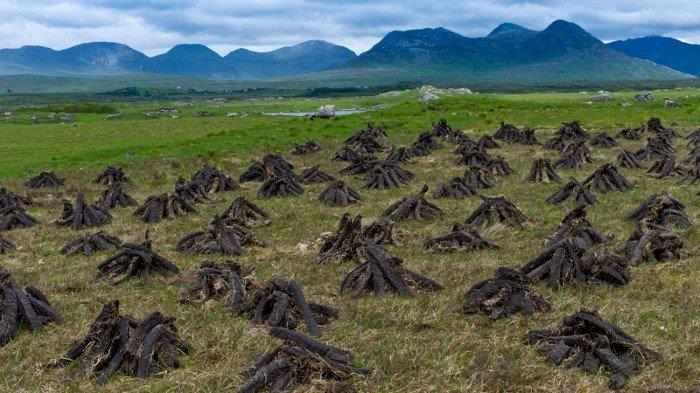 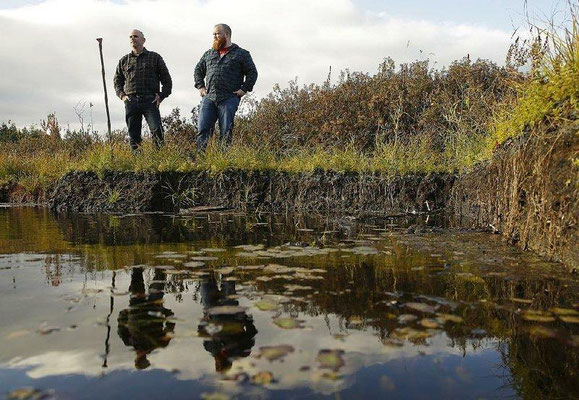 Nevertheless, Matt explains that he and his colleague did not only want to produce a Scottish single malt in the United States, but, following the example of colleagues like the Saint George distillery (in San-Francisco) or the Balcones distillery (in Waco, Texas), they wanted to create a new category of whisky : an AMERICAN SINGLE MALT.

While showing us around the distillery, he explains that he tries to use local products as much as possible and also to be as traceable as possible (only the yeast comes from the flat country). 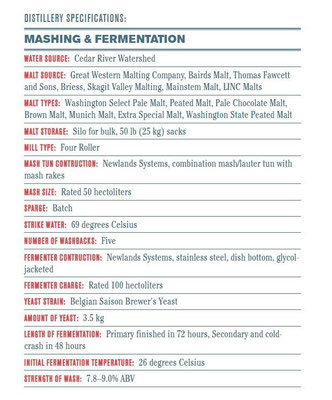 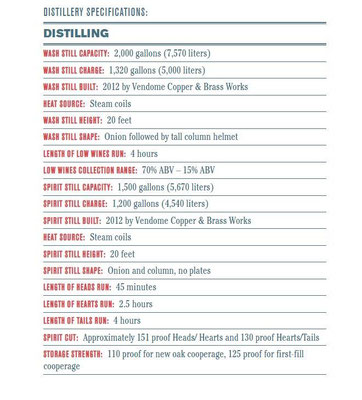 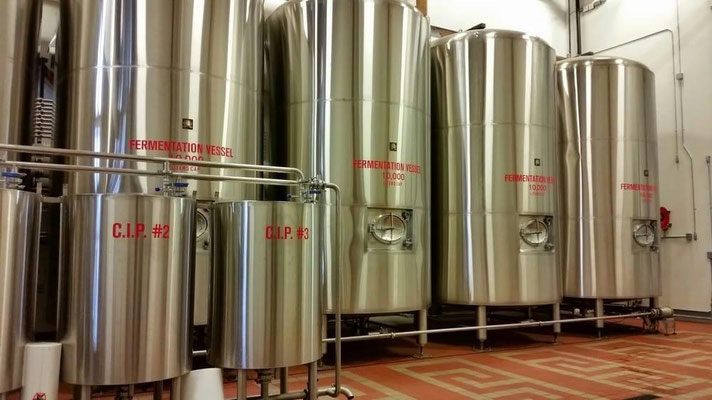 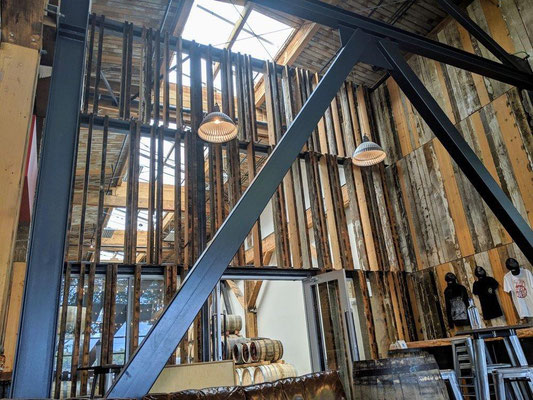 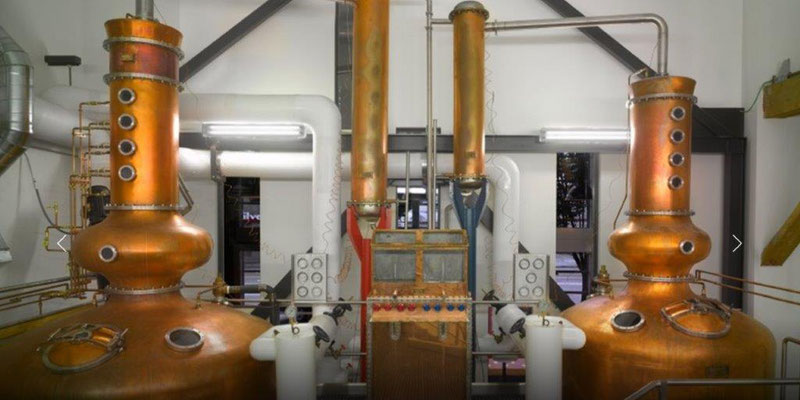 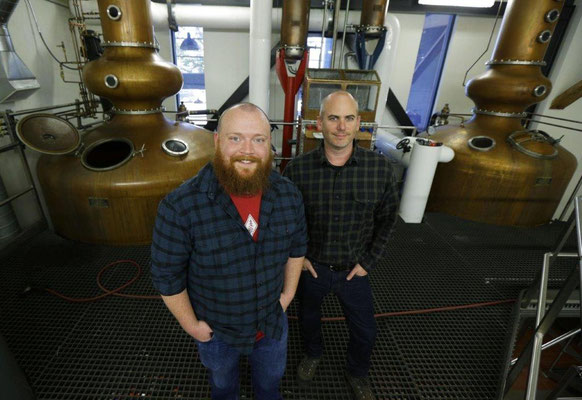 At WESTLAND, two column stills proudly sit in the centre of the building and have been producing fine peated and unpeated distillates for 10 years now. A know-how awarded in early 2018 at the American ICONS OF WHISKY (as best American single malt of the year and best master distiller of the year for our host.

And when we know that the distillery is part of a big French group (REMY COINTREAU) and that it has just bought pesticide-free land to produce its own barley and even in the future to offer organic whiskeys.... We haven't heard the last of WESTLAND.

Because not only does WESTLAND produce single malt, but the distillery also produces peaty single malt, which makes it a double innovator on the other side of the Atlantic. It is the peated distillate that we will taste today.

For the tasting, Matt accompanies us to the tasting room through the long rows of casks that make up part of his warehouse.

Once there, in order to continue the visit in good conditions, he plays the rest of the Eddy Vedder album. And it's on the sounds of "Long Night" that we'll do the tasting. 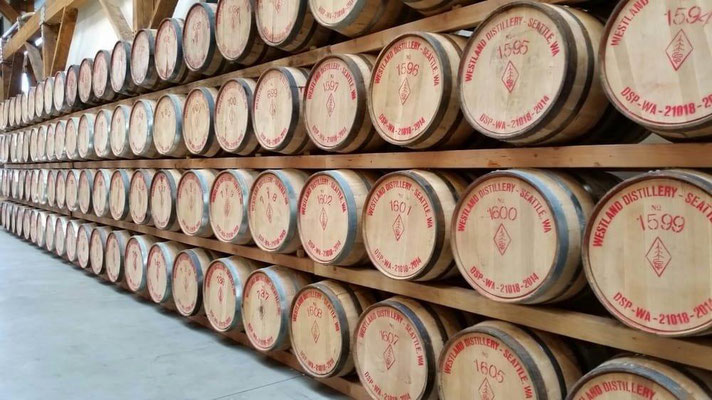 But he mainly presents those of the HERITAGE range (for which we will taste the peaty one): AMERICAN OAK, SHERRY WOOD and therefore PEATED. These three distillates are produced from roasted barley and are aged in first-fill Bourbon casks or ex-sherry casks (Oloroso or PX), but above all in virgin oak casks from the forests of the North West of the United States.

Paradoxically, this range, which has proved its worth and positioned WESTLAND as the precursor of the American Single Malt, is living on its last stocks (but there are still some left I assure you). From now on, Matt explains us that we will have to rely on the OUTPOST range, on which he has perfected his initial recipes and with which he wants to consolidate the position of the distillery.

This new adventurer range is also composed of 3 products that highlight the distillation know-how but also the ageing know-how. Just look at it:

- SOLUM which will obviously interest us (as it is peaty) but which is quietly waiting in its casks.

Of course, Matt's on the premises is full of beautiful little nuggets cask by cask, but you have to go and see it! We also see the single malt released a week ago to proudly celebrate the company's 10th anniversary.

But, in true PEAT DREAM fashion, it's the peated one that I'm going to taste for you today.

So Matt explains that at the moment, although he has peat bogs around here, the peated malt (at 55ppm) that has been his base comes from Scotland. However, this barley is only one of the components as it is added to a local malt (grown in the state that is found in American OAK). In the end, this distillate comes out with a peat content of around 25/30 PPM.

The two distillates combined then spent a few years in virgin oak casks but also ex-bourbon and ex-sherry casks. A clever mix of old and new continents. A vast programme.But, in true PEAT DREAM fashion, it's the peated one that I'm going to taste for you today.

So Matt explains that at the moment, although he has peat bogs in the area, the peated malt (at 20-25 ppm) that has been his base comes from Scotland. However, this barley is only one component as it is added to a local (state grown) malt.

The two distillates combined then spent a few years in virgin oak casks but also ex-bourbon and ex-sherry casks. A clever mix of old and new continents. A vast programme.

This American Single Malt has a deep golden copper colour.

What about the tasting?

When the nose enters the glass it will discover beautiful biscuity and waxy notes. It gives off the warmth of the Pacific Ocean on a sunny day and the sweetness of honey.

On the second pass, a light and discreet peatiness appears. It is accompanied by the smell of sweet citrus and tropical fruits. If we insist, we also discover some spices.

The third passage remains very sweet with a hint of red fruits (oloroso) which remain hidden behind the honey and the biscuit which make a comeback.

In the palm of the hand there is a very slight smell of rubber but above all we smell the barley of the great American prairies.

On the palate, the peat smoke is more pronounced but the aromas remain sweet and buttery. It is fresher than the nose. The lemony tension of the citrus fruits and a slight hint of pepper can be detected. When kept in the mouth it will trigger sweet and honeyed notes.

This distillate is very soft and does not attack even if the citrus and pepper remain a little on the edge of the mouth.

The finish remains on smoky notes, a hint of almond texture and lemony notes.

It is on these beautiful smoky notes from the "Far West" that we take leave of Matt. I think I'm going to continue a little way in the United States even if I meet other producers who don't make AMERICAN SINGLE MALT.