Imagine, you are in Islay (again but it is such a beautiful island), you leave the Scarabus farm, leave behind you the Skerrols log and take Route 846 towards Bridgent. On the way on your left a sign indicates ISLAY HOUSE SQUARE ! Any shops here? In the middle of the forest? Only in Scotland do we see that! The curiosity is too strong, you have to go and see!

50 meters of path and you arrive in a group of buildings! This place is so peaceful! There is a Kilts and tweed factory, a jam store, a toy store and.....a brewery!!! Yes, a brewery on Whisky Island: Islay ALE.

In front of the shop a barrel cut in half in which the great names of the island's spirits are enthroned! Surprising for a brewery. 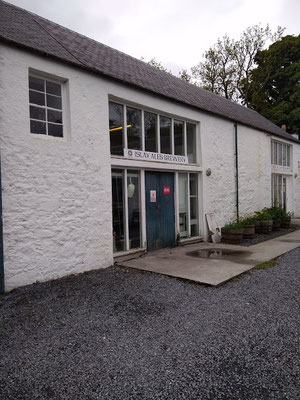 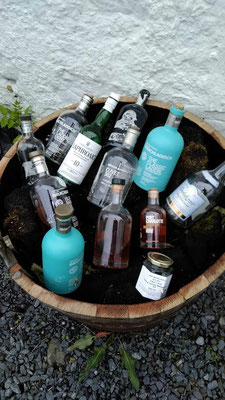 A tasting is required! The range is not large but marked by its island! LAGER, STOUT, ALE and RYE ALE and even IPA! A little discussion with Donald, all smiles (and who speaks a French worthy of the name), tells us that with his friend Mackay (the Islay Boys), they have just bought the establishment! He also tells us (we are getting there) that now it is not only beers that are offered, but also whiskies! Ahhhh!!!!! 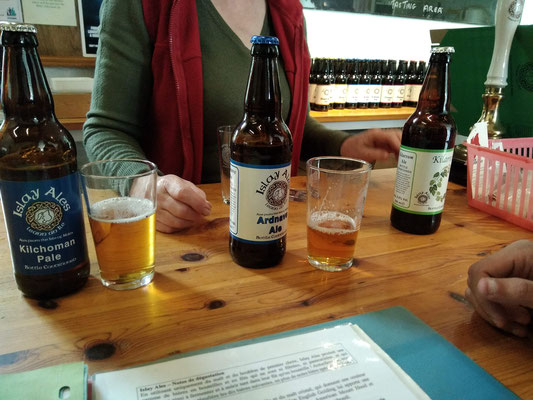 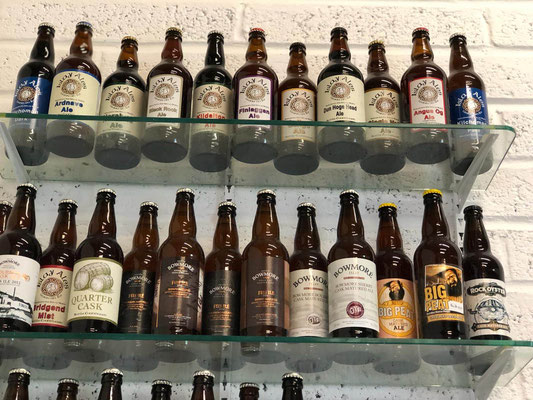 Indeed the two new owners (both from Port Charlotte) launched in 2018 the FLATNÖSE brand (fleshy blends) and above all (I tell you we're getting there) a brand new 100% Islay BARELEGS single malt assembly (there is also a BARELEGS HIGHLAND but we'll come another time).

This is the one we will discover here together.

Donald explains that his new whisky is intended for lovers of peat (surprising on Islay!) but for whom a tasting should be synonymous with celebration and joie de vivre. According to Donald, whisky is made "to celebrate joys and reduce sorrows"!

The look of the bottle is modern and without fuss. However, it does tell us the colour. It is grey like peat smoke. She also shares with us the philosophy of the brand and announces the color: "Born Of Adventure" (certainly in reference to the epic journey through many countries that the two men made before returning to their Island). We're going to travel!

As for the colour, this single malt is light gold (it looks strangely like one we have already tasted on the east coast of the island, but shhhhh!) and of a natural colour.

On the nose, the scenery is set: We want a peated whisky, we have a peated whisky. The smoke smells are dense but sweet while remaining greedy. We note nevertheless a certain freshness (marine we are on an island anyway). This impression dissipates slightly (but remains present) at the second pass to give way to aromas of stewed orchard fruits (apple, pear, figs passed through a copper pot and cooked on a peat fire - perhaps in reference to the marmalade shop facing the brewery). The peat still reminds us in the end. On the third pass, it persists but allows greener malt and pepper aromas to pass through.

All this olfactory journey is therefore accompanied by peat.

The mouthfeel of this whisky is clear because you can feel its "46°" passing through. It is accompanied by a beautiful peat that nevertheless knows how to remain light to give way successively to woody notes, marine freshness and a hint of peppery affirmation (each waiting his turn without wanting to crush the other).

The finish is long and on a peated but also slightly lemony note.

As announced on the bottle, this new whisky from Islay wants to be (and is) like King Magnus III (Magnus Bareleg): frank, assertive and conqueror. The single malt BARELEG is perhaps a premise for the Islay boys to conquer the island! In any case, it is a very good whisky (and even an affordable addition in terms of price).