For this tasting back to London, not far from Piccadilly, at 3 St James Street, in the BERRY BROS shop. RUDD (one of the largest and best known wine merchants in England). The shop with the black front is easy to find and is right next to the KINGSMAN tailor 😉 !!

The first time we entered the shop, it was only a copy during a live whisky in Paris. In the real shop, opened in 1698, the ceiling is covered with staves and the walls covered...with bottles of wine and whisky. There is a very special, solemn atmosphere. Here we want to be courteous, phlegmatic and wear a bowler hat! Inexplicable.

It's John, who is very happy with his suit and brogues, who welcomes us. He lets us go around this magnificent boutique where the great Bordeaux and Burgundy wines, but also the rarest whiskies, rub shoulders. 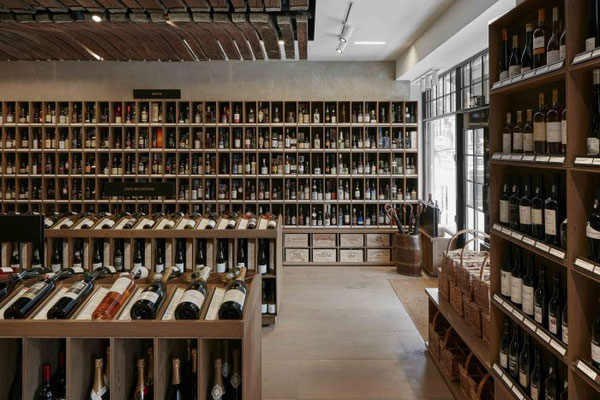 After a while, he comes back to us and asks us if we want something. The deal is simple (and we think the challenge is difficult to achieve in this luxurious boutique): We're flying back this afternoon and we only have the last 40 pounds sterling in our pockets. Can he make us dream with so little? He looks at us and says "well! do you like sherry?". Do we like sherry? I think he saw it in our eyes. He leaves us alone for two minutes and comes back with a bottle containing a mysterious dark terracotta liquid! What a color! Indeed, he promised us sherry and we will have some.

He looks at us and asks us if we want to taste them? Forgetting our goal of £40 we gladly accept in the face of so much mystery.

We solemnly follow John through the best bottles and reach the back door of the shop. Where is he taking us? In fact, on this beautiful sunny London morning, he's going to give us a taste of his whisky outside. High class in the middle of London.

We thus arrive in a very quiet, wooded inner courtyard. Just next to the door is a standing drum on which he places the bottle and the glencairn that we will use.

By pouring the dark liquid into our glasses, they explain that it is part of the Classic Range that Berry Bros. & Rudd makes from whiskies aged in sherry casks. But here, it is a blend created from the best Sherry Butts. Already an aged sherry whisky has a pronounced taste, so many... one can expect an explosion in the mouth (and one understands a little better its color).

Before going on to taste, he also humbly announces that this blend has won the 2019 winners category of the World Whiskies Awards (just that).

When the nose dives into the glass containing liquid so dark, it is invaded by rich aromas of orchard fruits (plums in particular). Beautiful. On the second pass, it is the pronounced smell of wood and sherry casks that carries the bet with now the smell of prunes (one would almost think of an Armagnac). You could even find a bottom of walnut stain at the end.

In the mouth, it is very sweet (despite its 44.2°) and coats the palate with a vanilla sweetness mixed with dried fruit. At the end of the palate, before swallowing it, one feels a little bit the sweet bitterness of sherry barrels accompanied by that of spices.

It is this note that remains in the mouth for a long time once swallowed. We wanted sherry and we remember it.

With John we have just had a great experience but let's think back to our goal of £40. But that's without counting on Berry Bros. & Rudd's Classic Range! Indeed, our surprise was huge when John announced a price of £32 and told us "You even have money left to buy magnets at the airport" with a smile on his face!

This is how we came out delighted with this shop dating from the end of the 17th century. But I think our remaining £8 will be used for a drama in a pub (we don't do it again)....