BOWMORE THE DARKEST VS GOLDEN AND ELEGANT

Confinement is lifted in France, but we can't always move too far from home and in the UK it continues. There is no other solution for us than to continue our virtual journeys.

So, I propose you to move in reading to the west of Scotland on ISLAY to go and visit the oldest distillery on the Island: BOWMORE. The appointment is made with Kat (whom we already had the opportunity to meet in previous tastings).

Today, she will allow us to compare two 15 years old distillates: The " DARKEST " and the " GOLDEN AND ELEGANT ".

I arrive on my bike on the shores of Loch Indaal.

We are here in Bowmore on one of the spots that every peat lover dreams of. A large sea bay with on the left in the distance either distilleries in full operation (Lagavulin, Ardberg and Laphroaig) or dormant (Port Ellen, Gartreck) and on the opposite side of the bay Port Charlotte and a little further up on the bute Kilkoman. Here we are in the land of peat.

Unfortunately, Bowmore is closed, no more sermons in the round town church and even the oven in the Peatzeria is no longer burning. So it's alone on my bike that I arrive in front of the distillery.

Luckily my friend Kat is waiting for me and has the keys to the N° 1 Vaults (one of the oldest maturing cellars, where a good part of the brand's distillates have been ageing below sea level since the 18th century).

The place is of course very quiet and solemn. As one can expect, the cask is king here, small, big... There are even Japanese Mizunara casks (maybe a future tasting) hummm.

For your information, the tasting of the day will be based on the casks' brut versions, while the bottles will be more for the funny ones since they will be reduced to water before bottling (sorry! ). 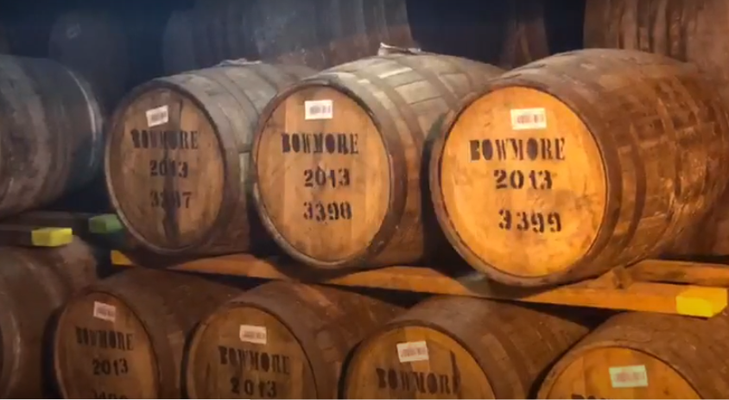 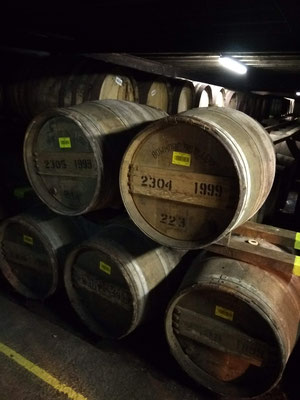 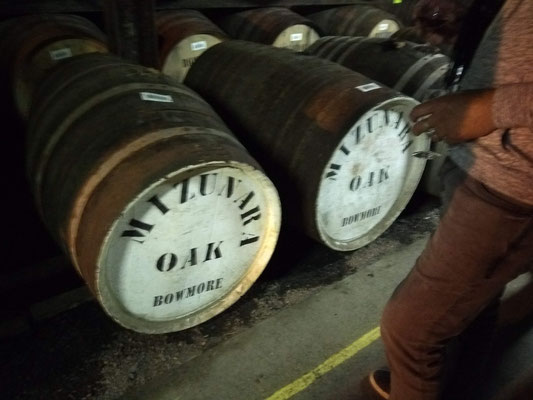 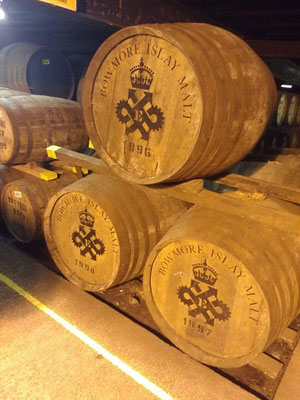 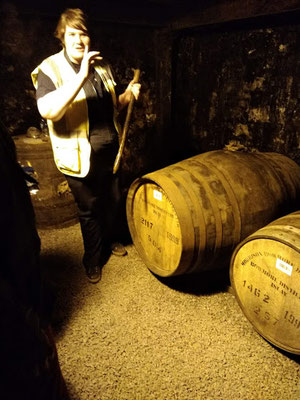 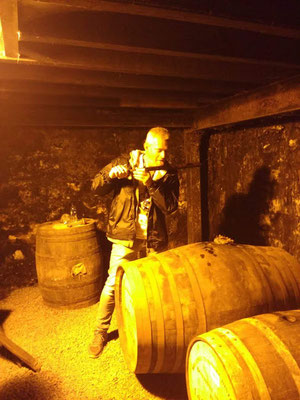 We must not leave here in silence what unfortunately becomes quite common: these two distillates were born 15 years ago, which although common nowadays, gives the wood the opportunity to express itself. We will therefore compare today two versions of finishes of the same distillate: 13 years spent in first-fill bourbon casks.

As always in these moments, it takes a good help to blow the bung and to be an angel (and a master blender) who only have access to the inside of the barrel.

The liquid that comes out of the first dive of the wine taster (in the barrel of ex sherry) is a beautiful dark amber colour. Kat pours it directly into the decanter on a table next to it. The liquid that comes out of the second barrel (the smallest) will have a much lighter colour (close to a beautiful barley colour not yet malted) as it slides into the second decanter. As expected, although there was less contact with the wood of the barrel (given its larger size) the Oloroso sherry finish came to colour the liquid more strongly than the bourbon barrel. In any case, whether dark or light, both colours make you want to taste it.

To do this Kat proposes to leave the n°1 Vaults (where we can say it's not very hot) and to go out in the sun of this spring day.

In the sun the colour of the two distillates is bright and their difference is striking.

The tasting starts on the rocks.

Let's start with the OLOROSO finish:

When the nose plunges into the glass, it is coated with the beautiful notes offered by the sherry finish. The dark chocolate cake baked in a peat fire is there. But as often at BOWMORE, the smoke remains very discreet and subtle: "barely" 22 ppm measured at the end of the drying process (although God knows that, having experienced it, it smells very good the smoke in the distillery's dryer).

In short, to these beautiful chocolatey and slightly smoky notes are added the touch of red fruits and raisins from the sherry. At the second passage, more spicy notes are added, but they remain nevertheless sweet. No particular aggression as the years have tended to soften the aromas. It is in the apple test of the hand that one discovers the most the smell of sweet smoke.

As for full-bourbon (ageing and finish), the olfactory adventure is quite different (logical). When the nose plunges into the glass, the peat contribution is even less marked and the smells are much more precise. They will oscillate between sugar and vanilla on the first nose and more lemony notes when it is plunged back into the glass.

So it is not only the difference in colour that marks these two 15 years old distillates, there is also the nose. In the apple of the hand the peat will be more like a cold tobacco than in the finish sherry.

Let's have a look!

When the amber liquid enters in the mouth, it is with nice woody, fruity and very slightly smoky notes. There is no spice aggression, but more winy sweet notes of red fruits. As it stays in the mouth, the peat, which is even more discreet than on the nose, fades away completely to give way to more BOWMORE citrus and floral notes. When it finishes its 15 second run in the mouth it is with the return of the aromas of sherry.

It is these sherry notes that remain in the mind (and throat) for a long time once swallowed. They are accompanied by a fresher and saltier contribution (which had not been obvious in the mouth).

One can clearly say that this 15-year-old version knows how to combine sherry and Islay.

For his 15 year old colleague, who has been entirely through Bourbon barrels (small or large), it will be quite different. As announced by the nose, on the palate, it will be much more woody and citrusy. The entry is nevertheless rather soft and the lemony notes which come to increase the marine character of this whisky are nevertheless rather soft and vanilla. It is by keeping it in the mouth that it will reveal even more lemons and now almond and a more marked smoke point than the sherry version.

In the end, once swallowed, it is moreover these two aromas (almond and lemon) that remain in the throat for quite a long time. They will nevertheless be accompanied by a hint of peat.

This double tasting, set in the confined calm of the Indaal loch bay, highlights the true differential of the woodwork and allows peat lovers to take full advantage of the aromas without having a taste of smoke (which is nevertheless very appreciable) which rounds out the whole.

It is an experience that I advise you if one day you pass on the Isle of Islay after the confinement ! Ask to do it with Kat, she's great !

Back to comparisons
All peatdream.com tasting note
Main menu