As if my BRAD PEAT could fly over the seas, I continue my motionless journey of confinement and go from the peninsula of Campbeltown in Scotland to the peninsula of L'Armor in northern Brittany. As everywhere in Europe, the roads are empty and it is quickly that I reach the end of the "wild peninsula" in front of the distillery GLANN AR MOR ("by the sea" in Breton).

Because yes, the least we can say is that the distillery is at the end of the peninsula and at the seaside, facing the Sirlot plateau, the Maudez Island (where the Saint of the same name came straight from Ireland where whiskey was already produced at that time...) and the Bréhat Island (where I had already tasted the KORNOG SAINT ERWAN).

And this is probably what makes the distillery created at the end of the last century (1996) one of the best in France and especially that it produces the best maritime peated whisky in France : KORNOG.  Real salty peat like on the Isle of Islay. It is said that in the Cretaceous period, the peninsula of Armor was attached to Islay (hence the similarity in the tastes of the distillates), but it is "they say" 😉 !

Arrived in front of the distillery, as I could expect in full confinement, it is closed. Nevertheless there are cars. Also, hope is returning. All the more so because the moment I ring the bell, the door opens. Is anyone confined here? No, it's just Martine and Jean Donnay, the owners, who are taking advantage of this far too quiet period to take stock of their inventory.

By keeping a safe distance, I am thus welcomed in the distillery and can see the artisanal side and the passion of the owners.

One has the impression to have gone back to the time when whisky making on Islay did not yet correspond to the current huge volumes.

Here we take our time to let the liquid ferment in wooden vats, we heat the two small stills with a flame, we let the heating core cool down slowly to let the fat and tasty aromas in long coils and above all we produce little to produce better! A passion for whisky ! You add to that, a sea air and the protection of Saint Maudez on his island just opposite and you end up with some of the best whiskies in France (even Jim Murray said so in his "Whisky Bible" in 2016)! 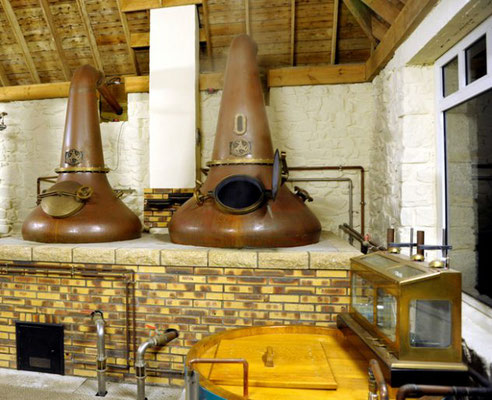 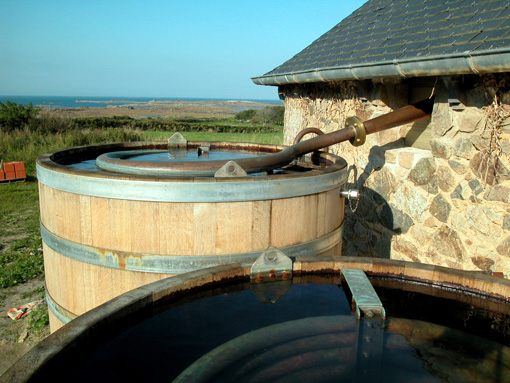 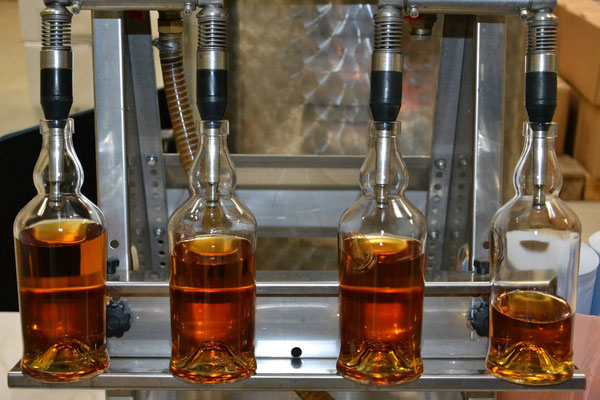 And precisely, on this very sunny day as Brittany has the secret (that's why it distills them in dropper 😉) Jean suggests me to taste the SHERRY OLOROSO 2019 version on the beach just behind the distillery (keeping safe distances of course) with the Héaux de Bréhat lighthouse in the distance (which you can find on the bottle) and a bit closer to the island of the same name.

Is the dream place, isn't it ? 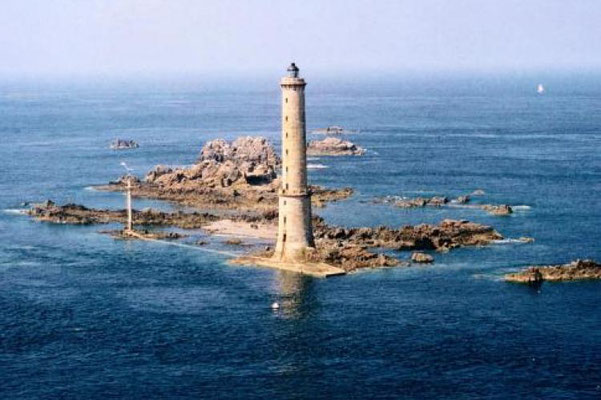 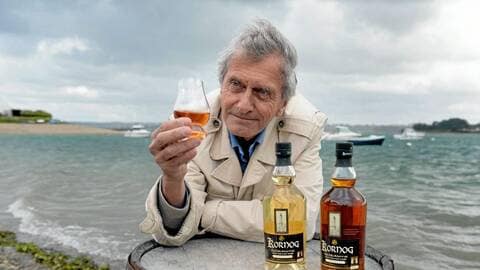 Jean is presenting his distillate:

It is a peaty distillate (about 40 ppm of phenols) and aged in a Bourbon cask and then refined in Sherry Oloroso casks. This finish gives it a nice, rather marked golden colour.

A light sea breeze rises and gives us the signal for tasting.

When I bring my nose close to the glass (without frankly plunging it into it) I already feel a few sweet pear notes that only make me want to push the olfactory analysis further. So I plunge my nose more into the glass and discover light peaty and iodized notes. We're not looking for a big aggressiveness of smoke, but more like gentle volutes. The appearance is fresh. The time to take a little bit of the ambient breeze and to plunge my nose back into the glass.

There, it discovers aromas of apple and finally the contribution of sherry with the sugar of the raisins. As for the peat, the aroma brought by the sherry is quite sweet.

At the third passage, the aromas are further refreshed with the addition of citrus fruits and hay, which round out and sweeten the atmosphere and above all give the signal for tasting.

Before tasting the distillate, I slip a drop in the palm of my hand and rub it. I clearly discover the smell of peat and also the smell of hay.

A "yec'hed mat" as the glasses are shocking!

In spite of the 46°, the entry in mouth is quite soft and even quite sweet on a note of pear. Nevertheless this impression is only ephemeral and is replaced by a beautiful slightly bitter peaty note. Spices then come to settle on the tongue bringing their share of harshness.

I advise you to look within yourself for the courage of the Breton sailor and to keep the liquid in your mouth longer. Indeed, after a while, it will become rounder, sweeping over the sides of your mouth, the peppery notes, sweet vanilla notes come in and bring sugar. The signal to swallow is given by a strong comeback of a few more lemony notes.

Once made, you will discover that this whisky stays long enough in your throat and your memory with a nice memory of peat and a hint of liquorice.

Don't hesitate to repeat the experience because the Islay-Armor-Andalusia mix is quite successful (once again!).

However, the inevitable will still happen and you will end up with your glass empty, but it will only be to discover beautiful memories of peat and barley.

So, as the tide goes out, the boats run aground and the islands opposite only keep the name, it's time to leave and let the Donnay couple finish their inventory. For my part, I'm going back aboard BRAD PEAT and head for new adventures not far from the magic forest of Brocéliande. I have an appointment with a Druid who will transform the water into Single malt!