On my way back from Scotland (and Islay) where I could partly satisfy my desire for peat (see Ardbeg Wee Beastie tasting), I took a break in the Auge region.

I was told about a version of BELLEVOYE whisky slightly peaty and aged in Calvados casks: LE VERT!

So I said to myself as it's on my way to the south, before tasting a whisky aged in Calvados casks, I'm going to find out more about this one by looking at one of the greatest French Calvados houses: Calvados Christian Drouin.

So I took a break not far from Pont l'Évêque and discovered that this renowned house nestled in its magnificent farmhouse is a specialist in the ageing of Calvados and has even made it its trademark. Imagine in its cellar barrels of Calvados going back to the 1940s!

I also realized that this calvados house likes to experiment with cask sharing, such as aging its distillate in Jamaican rum casks (Hampden) or Japanese whisky casks (Mars and its single malt Komagatake that I had the opportunity to introduce you to a while ago if you are interested! -NDLR-).

In short, the market was small to provide calvados casks to age whisky. 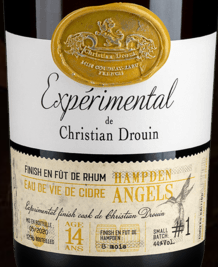 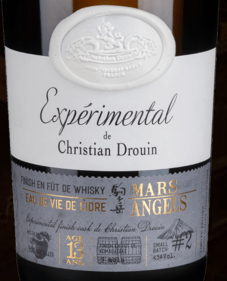 So, I understand better why, in its wish to produce exceptional 100% French whiskies, the company Les Bienheureux (which produces the BELLEVOYE range) has chosen to age one of its blends in Calvados casks.

So here are some (they are rare and therefore expensive) ex-calvados barrels that are heading to the Charente to house a few years a BELLEVOYE creation: Le VERT will slowly come to life.

To perfect the whole (and to please an amateur of peated whisky like PEATDREAM -but I am not sure that it is the true origin), it was decided to put a touch of peated distillate (always on the basis of a triple origin as for the BELLEVOYE whiskies).

So here is the setting, and what does it look like?

First of all, the liquid that flows into the glass has a colour close to that of a calvados: a well marked brown with coppery reflections. This colour comes from its first ageing in oak barrels for 3 to 5 years in the distilleries that produced it, and then from the finish of a few months, once blended, in barrels of very old Calvados (having contained this apple distillate for 40 years).

When you approach the nose you expect to go for a very lightly peated sherry!

When the nose plunges straight into the glass, it will detect a very light peatiness. It will also detect warm and peppery notes (which give the impression of a stronger whisky than the 43% alc announced). Finally, it will detect sweet notes.

On returning to the glass, the nose detects much more ripe apple, spiked with cinnamon sticks and caramelised.

Beware, this is not a calvados and the memory of the old distillate from the finish cask is not marked and is translated by an increased sweetness and a sustained presence of spices (don't expect to smell the frank apple like in a calvados). On the other hand, the finish makes the distillate mellow. Personally, I would say that it is close to a sherry ageing, but in the French style! The atmosphere remains much warmer than a calvados (in all honesty).

Didn't you detect the peat? Put a little in the palm of your hand and it will come out as the smell of cold tobacco.

As soon as it enters the mouth, this triple malt is clearly mellow, and sweet. But it doesn't last, pepper seeds come in next and sting your tongue. They fade away for a moment to leave the stewed fruit in the foreground. For a moment we detect a furtive bitterness. It is at the end of the tasting that you feel a hint of smoke and a honeyed texture (while the spices come to titillate your tongue again). At the end, if you still have an ounce of courage, you will have a vague memory of calvados, but this is the sign of the end of the tasting.

The finish is quite long and will be woody and spicy. Over time the finish will iodise and refresh you.

I know that it will not be easy to find it (as it is only available in a 20 cl version in a black gift box from BELLEVOYE) but I think that it clearly deserves a little tasting as it knows how to be atypical and still 100% French!

Like the owners of Les Bienheureux, I will continue my journey confined to France by going south to discover other distilleries. I am sure that my path will cross again with that of the Élysée whisky on more BLACK notes (but I will tell you).