As soon as I left Nouvelle Aquitaine (the new whisky region - Cf article-), I said to myself, I can't do otherwise than to go to the nearby Tarn et Garonne and make a stop in Montauban because there too it smells like peat since 2016 (at this rate there are so many whisky distilleries in France that it's not worth going to Scotland...ah yes it is! J).

Today we are going to the distillery of the famous Benoit Garcia: I named the distillery BRAVE OCCITAN WILD SPIRIT (BOWS for the intimate ones!) to taste the peat of its PUR MALT BESTIUT. 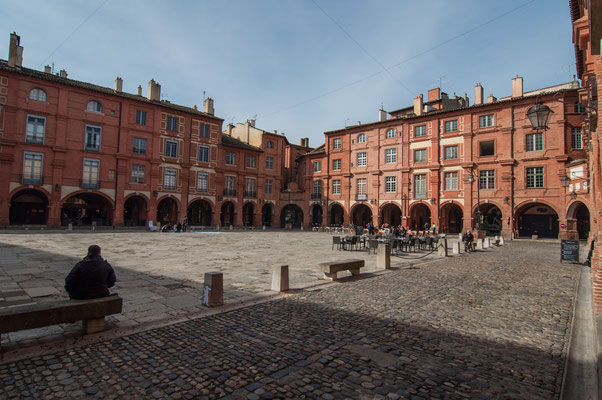 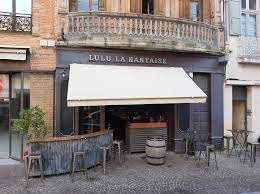 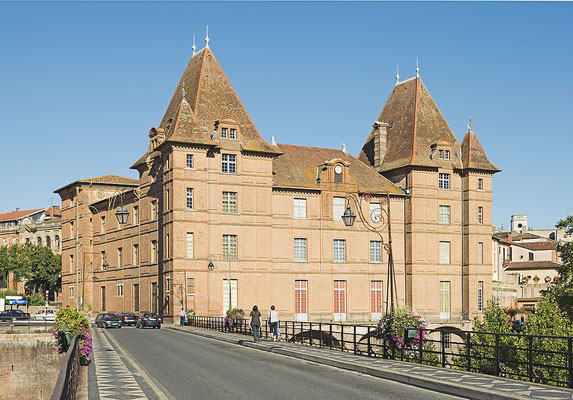 Before leaving the city where I grew up, I'm going to take a little trip to the second pink city to recharge my batteries. I arrive from the north by the traffic circle ("rond-pouingue" in Montalbanais language) of the "tontons flingeurs" and I immerse myself in the old town. BRAD PEAT noisy in the small lanes, a passage next to the Place Nationale (what we can't go there by car anymore?!), in front of Lulu la Nantaise's place (yes, the real one), at the foot of the Cathedral and I come out in front of the Old Bridge. I walk along the Ingres museum towards Sapiac  (the home of rugby)  and the south!

Only memories of my youth! Ahh one should never leave Montauban!

Moreover note that, as in Scotland with the Gaelic, here one not only the language of Oc but moreover one has the accent (which is said "accin") which sings (besides one does not say MONTAUBAN but "MENTOBIN" - I know it people still make fun of me -NDLR-)!

But enough chit-chat, we didn't come to butter sandwiches, we came to see a whisky distillery!

So I arrive in front of the one who puts the Occitan terroir in value BENOIT GARCIA. Be careful, the guy from Montauban, the one who hears angels singing, is battery-powered and you'll have to follow him.

With a BOWS cap on his head, he greets me with a big "Welcome Sir! My name is John! "(the tontons flingueurs  here are a religion!). 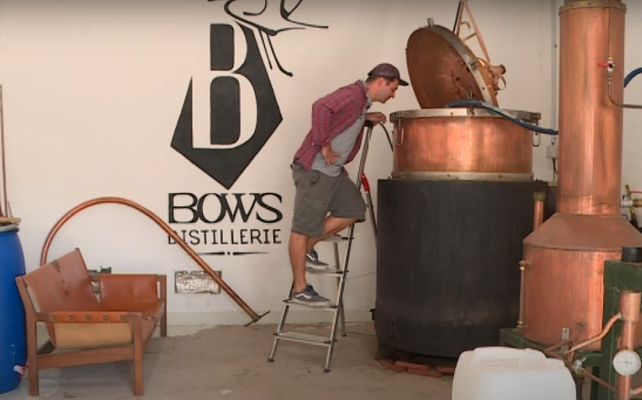 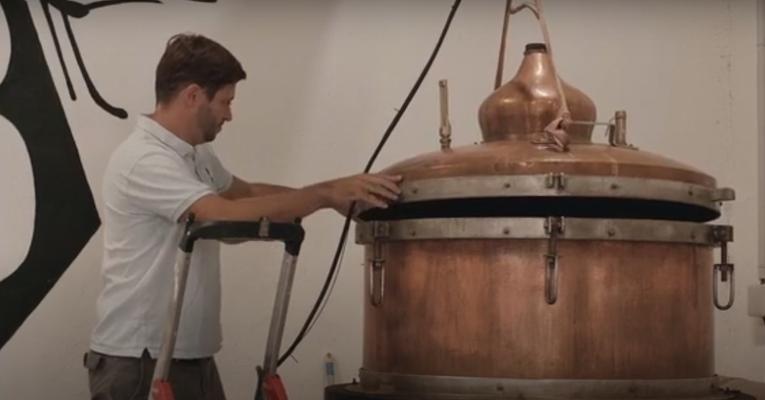 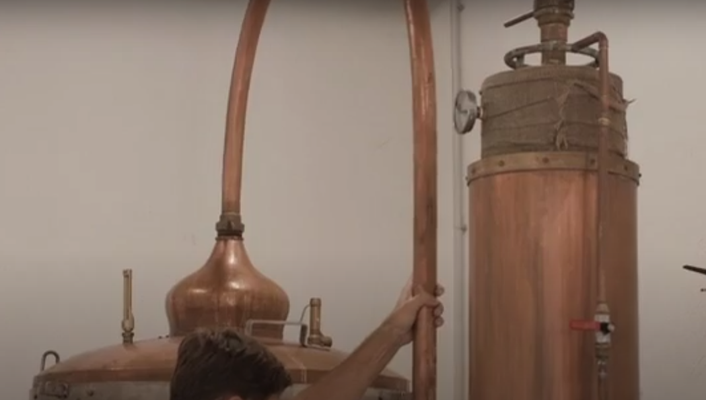 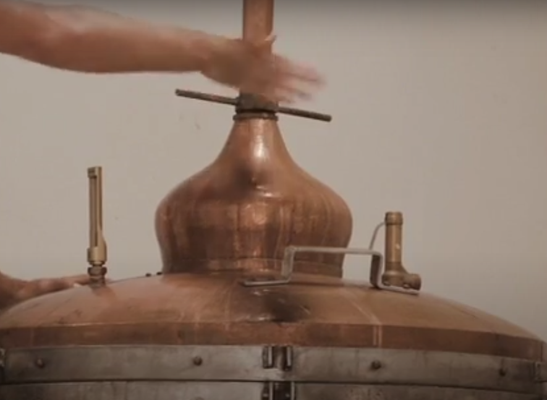 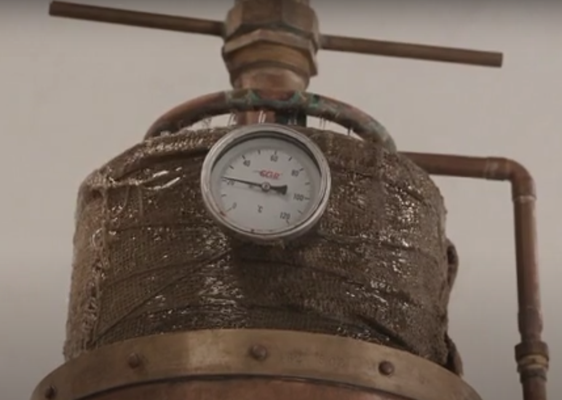 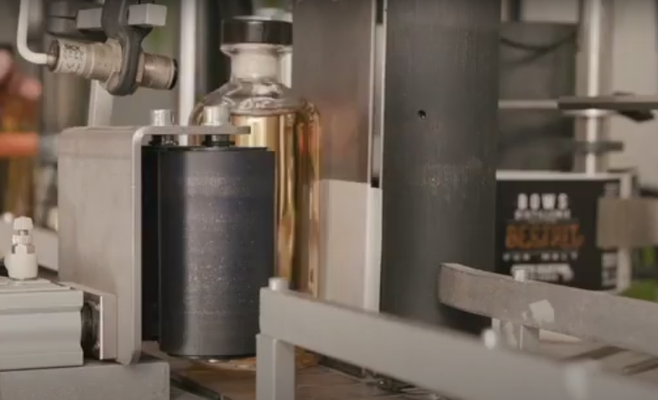 The visit begins with a presentation of the toy he created from scratch in 2016. Coming from a climate engineering background and a lover of spirits, he set himself the goal of making distillates flow in the Tarn et Garonne region while enhancing the region and limiting its carbon footprint. From the supply of organic cereals, which is local, to the almost globalization of the distillation process (brewing, fermentation, ageing and bottling), including the recovery of waste. Only the malting is outsourced, but this is often the case (even if here, when the autumn wind blows, I think we could stop the germination of the barley ;-) -NDLR-).

He did so much local stuff that he even designed the endemic still that sits in the middle of the distillery. He invented a still which can be either topped by an inverted fluid column or by a long swan neck (which allows double (or even triple) distillation). The latter is used to produce gin, vodka, rum and of course whisky. In front of the still he has installed an armchair to meditate while watching the transparent liquid flow.

The visit continues towards the GALAXY OF ANGELS (the distillery warehouse) where we are going to taste its realization: the peated PUR MALT BESTIUT TOURBE.

Before tasting it, you should know that since the tasting, the whisky range has been greatly extended and that the company is now "adult" (+ 3 years of ageing) and has the right to market SINGLE MALT (even if the Pure Malt was already very pleasant; this is not vitriol as the great Michel used to say). We can now find the BENLEIOC ORIGINAL, the BENLEIOC SINGLE MALT and above all the BENLEIOC TOURBE 53 PPM (and I can assure you that when Peatdream gets its hands on it, it will be in these lines!)

In short, let's get back to our brutal (BESTIUT in Occitan) peaty!

Benoit tells us that we have to be careful because under its 43% alcohol by volume, the beast is sleeping and only wants to express itself. Moreover, he also jokingly points out that he was "obliged" to write the name of his whisky in Braille on the bottle (labels drawn by him by the way) because he thinks that some of his consumers would have become blind! but it's "they say" he did it for safety reasons!

So this BESTUIT! Peat lover, you will be happy! 22 ppm on the display from a peaty barley and therefore partly roasted before being crushed, fermented and distilled.

Once distilled, the liquid is poured first into new oak barrels (which are now so cramped in the Galaxy of Angels that the distillery is expanding) and then into old cognac barrels.

Well, that's all well and good, but we're adults and we could perhaps make a little one of our own! And something tells me that it won't be "weird"!

Don't get me wrong, just because it says Pure Malt on the label doesn't mean that the slightly amber distillate that Benoit pours into the glass is any less a real SINGLE MALT (and yes, it is over 3 years old!!).

So what does he say?

As we approach the glass, I would say that if the label announced peat and that there is indeed some. But there's more to it than that, there seems to be a smell of hay (barley certainly) and ripe pears!

When for the first time we plunge our nose in the glass, I will say that I smell the fresh pear of a young whisky but also the barley of its agricultural origin. It smells of barley that has gone mad from the autumn wind. But he also smells the flat peaches that grow in the orchards on the banks of the Tarn.

"There are some too," Benoit says.

On the second pass he remains fresh but his youthfulness disappears. We can feel that the grisby wants to assert itself and that the peat it contains wants to enter the nose. But there is also a lot of fruit and especially spices!

It's on the third pass that the peat can't wait any longer and comes out accompanied by the smell of roasted cocoa beans!

The peat reveals itself more in the palm of the hand accompanied by beautiful notes of barley.

Nice announcement and "without being dishonest, at first sight", it really makes you want to taste it!

When it enters the mouth, despite its 43% "you have to realise that it's rather brutal"! It is fresh and brings its share of ripe pear and spices.

Benoit tells me: "I know a girl from Caussade who drinks it for breakfast! "

For a while, it will have the slight primer of the cognac barrel, but it becomes thicker and thicker and lets appear the sweet taste of the chasselas and the spiciness (which is said "piquin" here) of the spices.  As for the nose, the peat is in the background and remains discreet.

Once swallowed, there are no tears on the cheeks, but a nice long memory of the bitterness of the dark chocolate and then a residue of light peat.

The hopelessly empty glass leaves a beautiful smell of lemon and barley.

I say that this is far from "that funny stuff we used to drink in a little clink in Biénoa not far from Saigon", this is a real single malt worthy of the name. It may deserve to be rounded out with a little more ageing and to soften the ardour of its youth but it is already very good for a first draft!

It is clear that Benoit has done well to get into whisky and not lemonade like Jo le Trembleur!

I can't wait to taste his big brother, which is said to be stronger in peat (53 ppm)! He says to himself that "it is rather a man's drink".

Unfortunately, the clock is ticking and I will have to leave Benoit (with regret) and continue my journey in my van!

Ah, I've said it before but "We should never leave Montobin!!! "