Having returned virtually but directly from beautiful Islay (where I tasted the CAOL ILA unpeated -NDLR-), I already feel sick of peat.

Having heard strange rumors about the arrival of a new peaty single malt in the center of France, I leave on board my Brad Peat in the direction of the land of white virgins: Auvergne (the queen of volcanoes after the queen of the Hebrides...normal).

My road thus brings me in Haute Loire to, barely, 20 minutes drive south of Le Puy en Velay in the small town of Solignac sur Loire in the DISTILLERIE DES BUGHES.

After turning around in the village without finding the mysterious distillery, I decided to ask for directions because it was out of the question that I would leave the mountains without having tasted this long-awaited single malt. Where can I find someone in time of confinement? The church! I thus went towards the church of Saint Vincent. Well took me well because in front of the portal of this 500 years old Romanesque church, I fell on a man. I approach masked and respecting the safety distances and I introduce myself and explain the reason for my coming to Auvergne.

In turn he introduces himself: "my name is Bérenger and I think you have come across the right person" (Bérenger was no more and no less than the creator of the Bughes distillery).

He says to me: "you are with the right person". So here we are on board my van through the countryside of the Haute Loire.

While he tells me how he, as a great enthusiast, created the distillery in 2014, we make a first stop at the distillery on the old railway street. We enter a building that looks like an alchemist's lair. Bags of barley (peat at 20 ppm and coming from Belgium but soon organic from the region -in 2023- Editor's note), a brewing tank and shelves containing large glass bottles and filled with decoctions in the process of fermenting. In front of me, the heart of the beast: 8 Charentais stills standing as if on a chain, quietly purring and spitting out their liquid through their swan necks.

He tells me that he has been producing pure malt and other liqueurs for 6 years. He especially tells me that after a long wait he finally has the right to market his single malt.

I'm thinking that maybe it's time to taste it? He looks at me and tells me that he wants to take me somewhere else to proceed with the tasting.

So we go back up into Brad Peat and hit the road again.

We leave in direction of the south for 5 small minutes of road on the departmental road 54 for a first stop in the mounts of Devès. Bérenger makes me park Brad Peat on the side of the road and we leave for a 5 minutes walk through a scenery that looks like the valley of Speyside. We finally arrive at the edge of a brook, a future tributary of the nearby fledgling Loire. Here, he wants to show me the pure water which is the base of his distillate. But he also wishes to show me the magnificent Beaume waterfall which makes the place even more majestic and magical.

But our journey is not finished yet, we go back to Brad Peat and we take the road full east towards the Yssingelais mountains.

At the end of one hour of road, we arrive at the edge of a new road which seems to lead us on a small valley. Do not ask me the name of the city, it remains secret. Also, abandoning once again my faithful steed, we leave for an ascent which leads us to approximately 900 m of altitude in front of a summerhouse! Along the way, Bérenger tells me of his wish to keep the name of this place secret, like the American moonshiners of the Prohibition era and Al capone. Whisky always ages best when it is surrounded by a cloud of mystery and when the ageing cellar keeps a good temperature.

Here, at 900 m above sea level, we are not in front of a cheese-ageing barn but a real warehouse. This fact is confirmed when, inside the building, I find myself in front of piles of barrels!

And not just any barrels! Big 500-liter Spanish oak barrels of Sherry Oloroso (Sherry but). In a corner, you can also see new oak barrels that are dormant (and aging a whisky that we will be able to taste next year when it comes out) or barrels of Bordeaux wine.

The decor finally planted we will finally be able to taste this real Altiligerian (from Haute Loire -NDLR-) French "sherry bomb" so long awaited by the creators. 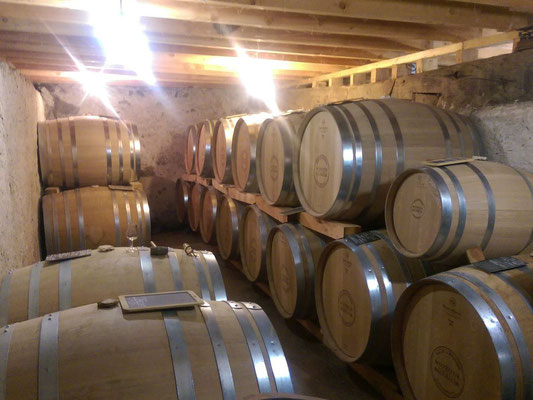 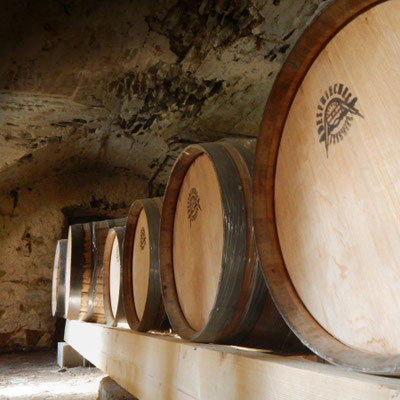 Taking advantage of the beautiful sunshine, Bérenger took a bottle with a blue and purple label and containing a liquid of a beautiful deep yellow color and two glasses and we return outside for tasting.

To the health of French whisky.

When we dip our nose in the glass for the first time we discover the freshness of a ripe pear that we often feel in a young whisky but also a sweet hint of vanilla. On the other hand at the second passage it will reveal itself. Smells of malted barley and peat roasted barley make their appearance. Its character, which I would describe as agricultural, is there. Imagine yourself in an Auvergne farm in front of a cantou where you are burning blocks of peat and where you have left the door of the barn with the wet straw open (I let you visualize the place and the smells).

It is only at the third passage that the impact of the young sherry aging (only 3 years old) makes a timid entrance. Then comes the warmth and roundness of red fruits, the tension of the spices and finally the harshness of the aging sherry.

I think this is the first time I have come across an "agricultural sherry bomb" (in the noble sense of the word) in which the three passages of the nose are very distinctly different. I find that this young whisky, which will certainly round out as it ages, is a good mark of its imprint in the French soil.

In the mouth the surprise continues.

As if the peat smoke was still present, it precedes the entry of the liquid in the mouth.

One then says to oneself at 40% alcohol, it is going to be rather soft! What nenni l'ami! He shows his presence from the first drops, releasing in the mouth a wheelbarrow of spices, malted barley and pears.

Then, as if the aging process continued in the mouth, it becomes rounded. It warms up, becomes a little more bitter and spicy. The sherry ageing, although still short (only 3 years I remind you), is quite present. At the end, it softens with the return of the barley and in the end the peat which remains discreet.

Once swallowed, the finish is moderately long but leaves a nice hint of liquorice and harshness. On the other hand, this finish is much longer in the palate and in the mouth where it reminds us of our memories.

If you have any doubt about the peat that has been discreet, put a drop in your hand to reveal it (along with the barley) and then return to the tasting. Your now smoky mind will discover it all the better.

Finally, unfortunately, the moment will come when your glass will be empty. Plunge your nose into it and you will discover the sugar of a vine peach but also the power of a piece of leather.

Although still young, this whisky, fresh from its cask (the first bottles were marketed at the beginning of November 2020) already keeps its promises and transcribes the passion of its owners.

It is just waiting to age and promises great prospects for future versions. Before joining my van to leave for new adventures, Bérenger tells me about future versions, organic, 100% regional ... many beautiful promises that make me want to return to the Haute Loire (I'm not far, I'm often in the Cantal!!).