And here we are once again staying in France and continuing to explore the magnificent French whisky terroir.

This time BRADPEAT is heading south-east and the high peaks of the Alps! No, it is not going to climb to the top of the Mont Blanc (it would be incapable of doing so) but it is going to stop "a little" lower down at 900 m of altitude, between the Ecrins massif and the Vercors (another whisky country!!!). Today we are going to the DOMAINE DES HAUTES GLACES to taste their Rye (once is not customary): CEROS SINGLE RYE ORGANIC WHISKY.

The advantage of the pandemic is that there are no big crowds on the road to the foot of the Obiou. Indeed, Florian P. (for anonymity) who works for Remy Cointreau, told me that it is at the ACCARIA pass in a castle that I could meet Frédéric Revol who created the distillery in 2007.

When I finally arrive in the Trièves, I understand immediately why the distillery has settled here. The region is semi-mountainous and above all it is studded with cereal fields. There are even more of them close to the castle! Something tells me that we are going to be on a short circuit and self-sufficient at Hautes Glaces.

At the castle, I came across two men, Ailloud Perraud and Chritophe Barret (the two cereal growers who officiate here). Full of enthusiasm, I tell them that I have come to see the Distillery. One of them looks at me and says: "but it is no longer there, Distillerie, it has moved 5 minutes away on another pass, the CORNILLON ! Missed!

He explains to me, nevertheless, that it is indeed here at the col ACCARIA in this castle farm that the adventure started in 2007 when they met Frederic Revol. They told me about the beginnings of the history of the DOMAINE DES HAUTES GLACES, about the research they did together to find the good ORGANIC cereals (still grown here by the way). They also explained to me that here, as in Burgundy wine, we don't talk about plots of land but about climates and that for the distillery there are 5 dedicated plots of land (Les gabert, le Serre, Andrieu, les Versannes and le Collet, all different according to the soil they are made from or the exhibition). When I told him that I came to taste the CEROS he told me that it comes from the Gabert in 2009 and its clay soil.

In a corner, a rather peculiar still with an atypical shape catches my attention. The two companions realize it and explain to me that it is the BIG DEDE, the bare-heat still that was used at the beginning of the distillery's history and which was allowed a good retirement in 2020 when the distillery moved. They tell me that the distillery and the ageing cellar are located on the same site but that the two stills were no longer sufficient and that a move to more modern and spacious premises had become necessary.

They also tell me that 13 initial casks are waiting to be bottled in a corner of the ageing cellar. Curious, I would like to know more. He explains to me that at the time of the first distillates a cuvée was marketed in empty bottles ! the PRINCIPIUM cuvée. The objective of this "founder reserve" is to allow the owners of the slightly more than 1600 bottles to come and bottle the bottle whenever they want, whether it is for those in the press or for patients aiming for a bottle for future generations. What a beautiful idea.

But back to our tasting, the two friends advise me to go back up to my BRAD PEAT and go to the new site at the Cornillon pass.

I got there very quickly and realised that there was indeed more room here and that the distillery had benefited from a clear modernisation.

As soon as I arrived I came across Frédéric Revol who was very proud of his new tool and told him that I had come to taste his CEROS in situ on Florian's advice.

Before tasting the Rye of the house (because today we are going to talk about rye and therefore Rye), he makes me go around the owner.

He explains to me that without having lost its honour, the distillery has changed gears (as they say when you ride a bike in the region) since it was bought by the REMY COINTREAU group in 2016 (a group attached to land values since it already owns the BRUICHLADDICH distillery farm on the magnificent island of ISLAY). They and that from now on, it is not 2 but 4 stills which boil (always with naked flame) and produce a wide range of whisky. Out the BIG DEDGE (peace to his soul). Nevertheless, the spirit of the pioneers is still there because his colleague the PETITE BERTA is still in the place and has added 3 new lads !

He shows me the new, modern and spacious facilities, which will allow us to continue to produce quality. Indeed, the original principle has been kept: here we make organic barley or rye whisky (not even a headache the day after the tastings! -NDLR-). 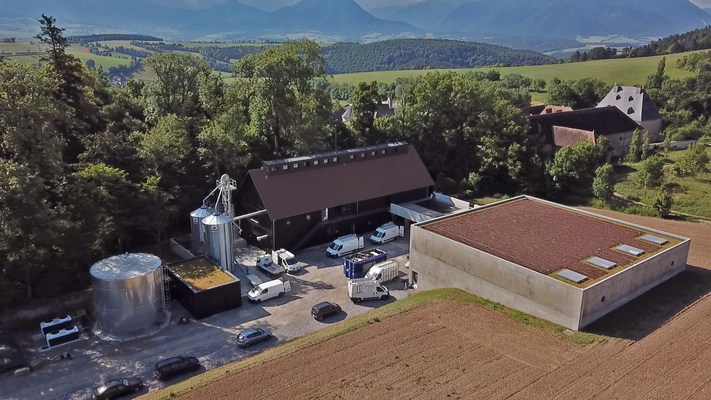 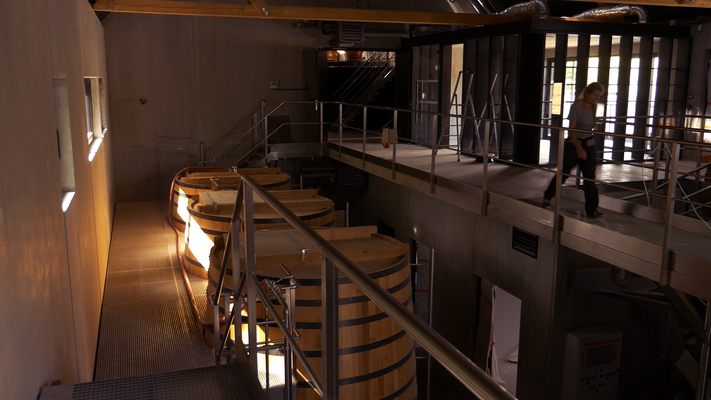 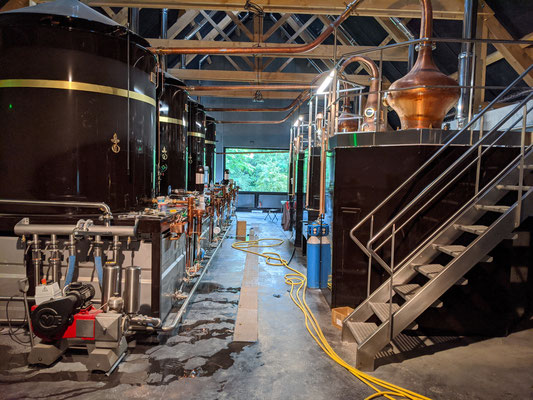 All this leads quite naturally to our tasting of the day. Presentation by the owner: The CEROS is an ORGANIC RYE single (not a headache, remember). It was distilled in 2016 in double distillation and from rye grown in the GABERT climate in 2015. It was bottled in 2020 at 53% alc (not a headache I tell you) after 5 years in Vin Jaune (Jura) and Cognac (Charente) casks! We're going to have a hard time making it more French from A to Z!

This ageing process gives this whiskey (if you want to be purist) a slightly coppery orange-yellow hue.

Let's move on to the tasting :

When you bring the nose close to the glass, it is as if sucked by it. The rye seems to make itself felt, but the plum tart that is hidden behind it makes the eye and stumbles back into the game.

Also, when the nose is plunged into the glass, the pastry side of the caramelised plum tart explodes. The atmosphere is soft and warm.

At the second passage, the atmosphere loses a little bit of its warmth and the spices make their entrance with a fanfare. Ginger invades the tongue! The distillate seems to gain strength and becomes even fruitier with an apple smell.

The third passage finishes to refresh the atmosphere and the nose is adorned with notes of citrus fruits almost to lemony notes at the end.

Overall the rye is quite discreet and you have to put it in your hand to feel it.

In the mouth, a sip completely fills the space. The quetsch tart is there. So is the strength of the alcohol content. Spices cover the tongue (ginger and almost chilli pepper). After this fanfare, when the fire calms down, raisins appear and the yellow wine barrel is brought in with a hint of sweetness. As the tasting progresses, if drops slip down the throat they do so by pricking it! Overall, the tasting remains mellow and ends on notes of nuts. The fire disappears completely at the end to finish on sweet notes of honey.

The finish is relatively long and remains soft, the mouth and throat keep the sweetness of almonds.

Overall, this Rye comes out a little bit from the other tastings of the Domaine de Hautes Glaces distillery and brings warmth to the Trieves frosts. It shows a know-how mastered by the team of the distillery on a relatively young whisky.

I greet my host and let him continue to produce beautiful creations from the top of his mountains, and I continue my journey on board BRAD PEAT towards new adventures.