I love receiving a message from Chris (the already well known MY LORD @chrismaybin in previous articles) because each time it is to discover beautiful things.

The last few times he took me to Islay it was to make comparisons between different Port Askaigs (between the 8 year old and the 100 proof here or between the two honourable 28 year olds and 45 year olds here).

So you can imagine that the reception of a new message was quite exciting. This time no boat to the small PORT ASKAIG on the east side of Islay, but a boat to the "capital" in the south, the no less typical PORT ELLEN. He wanted me to taste the new ELIXIR DISTILLERS Sherry Mash, the PORT ASKAIG - SHERRY CASK QUARTER and the ELEMENTS OF ISLAY SHERRY CASK.

So why PORT ELLEN?

Arriving at the harbour, I find MY LORD with his arms wide open and always a "so british" smile, who gives me a big "Bienvenou mon ami!

He tells me that we don't need BRAD PEAT, that it can stay parked at the port and that we will walk.

For people who don't know Islay, I'll make it simple for you, when you are in this place the choice is quite "convoluted":

- Either you choose to go north and you will soon find the new PORT ELLEN distillery, soon the Laggan Bay distillery (of the Islay Boys) and much further the BOWMORE distillery (and I'll stop here because there are so many distilleries)

- Or we can choose to go East and we will find on our way LAPHROAIG, LAGAVULIN and ARDBEG ! 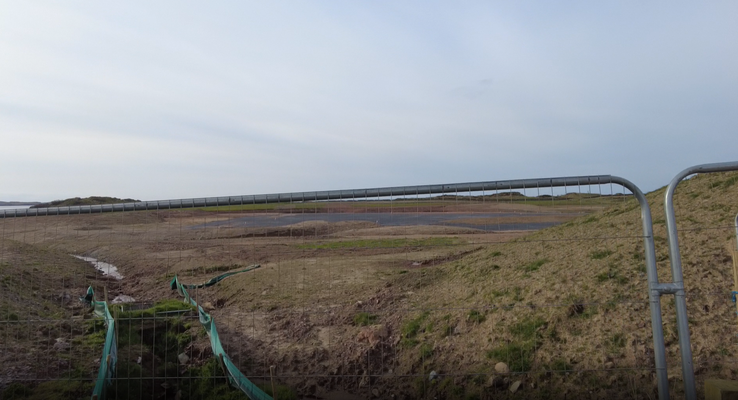 My Lord chose the direction of the East. We pass along the Caola Eilan bay with a beautiful blue sky (so usual in these places) and we arrive at the exit of the village. A few more steps and we find ourselves facing a construction site between the road and the sea.

My host stops and turns to me, hands me a helmet and says : "Welcome to the Portintruan distillery !

So obviously, you have to think ahead, because for the moment, unless it is underground, you can only see the foundations, but nevertheless, this is where the future distillery of ELIXIR DISTILLERS (a company owned by Sukhinder and Rajbir Singh, also creator of Whisky Exchange) will be located.

As I was touring the building site of what will be the distillery, which could have been called Farkin Distillery but will finally be called "Port-nah-truan" (Place of the stream in gaelic) in 2024, My lord gave me the main lines of the project.

He tells me that of course the distillery will produce whisky (and peat) but that it will also produce rum!

He tells me that to manage this great project, the English company has hired Georgie Crawford from Diageo, who had worked for Talisker and Lagavullin and who has already rebuilt the Port Ellen distillery. So, it's a local who knows her region well.

As you walk around the site, you can see that it will be big. My Lord confirms that it will not only be an eco-responsible distillery (heated in a closed circuit with bio-diesel and later with hydrogen) and sustainable (recycling and reuse as much as possible), but also an integrated distillery (the barley should be as much as possible local and a malting air is even planned).

My friend took me to the future site to taste the two new products (sherry and peat) of the house. So obviously, here again we have to look ahead, but we can already imagine future tastings here in club chairs facing the sea.

Moreover, as My Lord is a quality host, he had two club chairs and a barrel installed on the rocky mound offering a magnificent promontory facing the bay. And on the barrel he has placed the two bottles that we will use for the day's tasting.

The objective of the day is to show what should be the future productions of the new distillery of Islay;

The first whisky that My Lord presents to me is the new ELEMENTS OF ISLAY, which is part of a now smaller range of distillates. Gone are the mysterious codes (Ar, Bn, Kh, Lg.... and so on) and gone are the bottles that are too small and too quickly finished (we are from 50 to 70 cl). I had the opportunity to introduce you to the OC6 here!

From now on the range created by Oliver Chilton is limited to 3 references:

- CASK EDIT composed of distillates from second fill Bourbon and Sherry casks and which has an alcohol content of 46%.

- BOURBON CASK, aged in first and second fill Bourbon casks and offered in its almost natural version at 54.5% alcohol

- SHERRY CASK which is aged in first and second fill Sherry butts and hogsheads and is also offered at 54.5% alcohol.

Let's have a taste of this new peaty distillate!

The ELEMENTS OF ISLAY distillate SHERRY CASK has a marked copper colour.

From a distance one can detect a smell of cold pipe tobacco. But once you dip your nose deeper into the glass for the first time, the smell will become stronger, warmer and more fruity with some light spices taking over the top of the nose. Some peaty notes can also be detected already.

On the second pass, the warm and sweet aromas will give way to fresher citrus notes.

On the third pass the air becomes even more refreshing and it becomes more minty and tiger balm with a return of the smell of smoke from the chimney fire with green wood.

In the palm of the hand we find peaty notes but also those of a warm gingerbread just out of the oven.


Soft and dense on entry and very sweet with notes of oranges (chocolate-orange). But soon its power takes over (54.5% anyway) with lemon and ginger notes and lots of pepper spice and woody notes (bitter) from the sherry cask. Later on there is some warmth but also a slight bitterness from the wood. At the end it becomes honeyed but retains some lemon acidity and a smoky freshness.

Once swallowed, it has lemon and pepper notes in the mouth and smoky, mentholated notes in the throat. The palate is still marked by the spice flights.

The empty glass retains the stigma of peat but there are also hints of orange.

I turn to my lord and ask him: "Could it be that this distillate does not come from the penultimate distillery on the south-east coast of the island (Laga, not to be named)?

But my lord tells me that the secret is kept in Oliver Chilton's safe and turns to the cask to take the second bottle with the recognisable dark glass.

Without answering, he launches into the presentation of the new Port Askaig Sherry Cask Quarter (of which Elixir offers only 1260 in our dear country).

It is composed of a blend of Caol Ila distillate aged between 7 and 8 years in hogshead barrels and sherry casks (the famous quarter!).

It is a much lighter gold colour, close to what we are used to with bourbon cask ageing (the quarter sherry does not affect the colour).

On the nose, it will be very caramel and vanilla with a certain impression of heaviness and density.

The second passage is going to be more "green" with the arrival of peat smoke but also a much fresher smell close to eucalyptus. However, here we may unseal our "quarter sherry" with spices that rise to a crescendo in the nostrils.

The third pass will be more about the straw of the barn and an earthy side but will keep a sweet touch of orchard fruit.

In the palm of your hand, you'll feel like you're on Islay, with a distinct smell of tyre smoke (as we like it).

As is often the case with a "true" peated whisky, the entry into the mouth is preceded by smoky aromas.

Very sweet on the peach in the mouth, then the acidity of the citrus fruits is overpowered by the salty side. The spices are present but in a rather moderate and controlled way. One feels the smoke of the peat in the mouth. When kept in the mouth it becomes dense and buttery, thick and even sweet.

When swallowed, it will release its saline notes and the spiciness of a 95% dark chocolate. It will leave a long freshness and hints of spice that will explode here and there for a few minutes.

I point out to my friend that the water will soften the citrus and clarify its strength (57,1 % anyway). It will make it much more Buhnna than Caol I think.

Once again the mystery remains and the secret well kept!

One thing is certain, with such peaty and sherried announcements, we can expect great things to come out of the new PORTINTRUAN by 2027/2028.

I return the helmet and take leave of My Lord and see him for future peaty adventures.