I know I don't bring you too often to the land of blending, Japan, and that I stay more easily in Europe, but once again, it's to there that I'm driving you in my cosmic van BRADPEAT today.

What could be better when you go to a country famous for blending than to taste...a single malt. Today it will be the Mars Tsunuki Single Malt Edition 2022.

Those who have been following me for a long time know that I have a certain fondness for MARS distillates from the Hombo Shuzo group.

On my previous trip, I took you to what is certainly one of the southernmost cask storage warehouses in Japan, in the dampness of Yaku-Shima island, to taste a single malt from the first distillery of the group: Mars Shinshu (here).

Today I'm taking you to the second one: the Tsunuki distillery.

This modern distillery (which dates back to 2016) is located in the middle of lush forests and along the river that carries pure water from the Choya and Monte Kurata mountains and is used to create its distillate.

I say modern because the site that hosts it is not. In fact, it even contains the history of the Hombo Shuzo group.

Indeed, it was here in 1909 that the group first set up shop to produce shōchū (distilled mainly from rice, barley, buckwheat and sweet potato). And yes at the time whisky was not yet spoken of in Japan (since it wasn't until Masakata fell in love with Rita that the adventure began in 1923).

It is also here, just at the end of the first world war, in 1918, that a distillation "rocket" was installed (in fact a column still but of very big size!) and which made the company pass from the artisanal era to the industrial era.

Afterwards, there have been adventures in whisky distillation and other activities, but it is especially since 2016 that the second distillery of the group has installed its two Miyake pot stills there.

In short, they have not been distilling here for long, even if the whisky we are going to taste, the 2022 vintage, is only the second one officially released by the distillery.

What about this distillate?

Well, it was born in 2016 and 2017 and bottled in 2022! It spent those 5 or 6 years in one of the four cellars (made of stone or sheet metal), which host mostly bourbon casks but also virgin oak, sherry, cognac, local shōchū, gin, liqueurs, wines and even Islay whisky.

It is the work of young Tatsuro Kusano the house master blender. 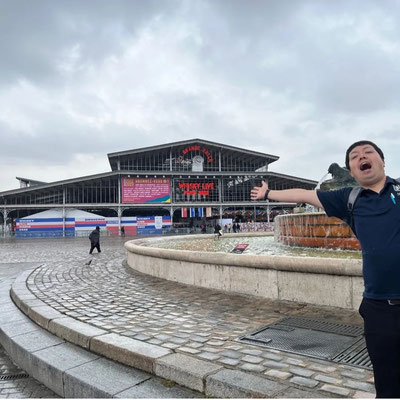 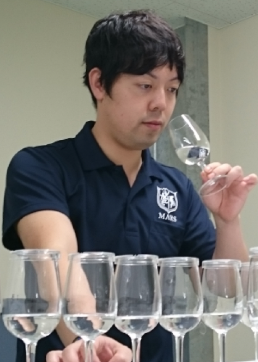 It is a rather marked golden colour showing its integral stay.

On the nose we find the fruity sweetness of a Japanese whisky. The nose has the fruity sweetness of a Japanese whisky, and then a hint of spice and woodiness which gives it a certain freshness, almost a smell of smoke. It seems to escape its youth (between 5 and 6 years) and its power (50% acl anyway!) to leave more room for its sophisticated notes in the successive passages.

In the second passage, no more spice or woodiness, but a sweet but also tangy peach candy.

The third passage is even rounder, switching to warm chocolate notes, but also a woody and slightly "vanilla-nutty" touch.

In the palm of the hand it is its raw material that is present with a barley smell but also its "Japanese" character with soft sweet notes. One could detect a background of peat smoke. The aromas that precede the entry in mouth are vinous and chocolatey.

In the mouth, it initially shows a certain roundness and warmth. However, it soon develops powerful woody and spicy notes.

One detects the presence of a touch of harshness and dryness on the tongue, even though its almost complete ageing in bourbon casks should have made it mellow.

The spices are very present and are accompanied by a hint of tobacco and smoke. Nevertheless, the sweetness of the bourbon comes next. Nevertheless, it takes the reinforcement of the saliva (certainly caused by the dryness of the beginning) for the spices to dissipate. They are replaced by a honeyed roundness that calms the fire in the mouth. However, the woody freshness that characterises it is still present.

The addition of a drop of water will further round off the first impression but does not attenuate the spices and its forest character, as if the distillate were irrevocably marked by the forest character of the region.

On the way down, it is fresh and leaves a note of liquorice on the palate.

The empty glass will retain traces of barley and apple.

Once again, this is a Mars with a marked typicity.

And it is on these beautiful notes that I will continue my journey with an appropriate expression (that only old people like me will understand): a Mars and I'm off!