Just out of the American single malt distillery WESTLAND (see here), I say to myself that I can't leave the United States without going to the centre of the country to taste a bourbon (I know it's not a single malt, but it's not usual).

And now you're going to tell me where to go? Well, simply aboard my trusty Brad Peat, I'm aiming for Kentucky of course. Indeed, this mid-western state, which unfortunately has just been blown away, is to the United States what Speyside is to Scotland. A profusion of distilleries.

Among all these BOURBONS, we will focus on the one of a distillery which has made its name in France : MICHTER'S.

I head for Louiseville on the banks of the Ohio River at the Kentucky state border to discover the distillery and taste the US1 TOASTED BARREL FINISH BOURBON (there has to be a bit of smoke taste after all, my name is PEATDREAM!).

On the road, I meet SØren Krogh SØrensen, the great Dane in charge of marketing the brand in Europe. He will be our guide during the visit and the tasting.

SØren does not take us directly to Louiseville, but further south to the small town of Springfield. Does he want us to meet Bart SIMPSON? No, in fact he wants to start the discovery of MICHTER'S by the base: the production of its cereals.

Indeed, it is near this town that the distillery owns a little more than 200 acres of farmland. And it is there that, in complete autonomy, with its farmers, it grows, without GMO, its corn, its rye and its barley.

Following the same route as the company trucks that transport this raw material, we continue our journey north: towards Louiseville, a little over an hour away. On the road we see names like MAKER'S MARK, BARTON, HEAVEN HILL... But let's not get lost, we came for MICHTER'S today.

Søren leads us first of all to the centre of the city on the banks of the Ohio river at 801 West Main street in the last distillery: the Fort Nelson distillery.

With its Romanesque windows, the building, which has only been open to the public since 2019, is the brand's showcase, shop and bar. But make no mistake, whiskey is still produced here. And not in just any old way! Here, a cypress wood still and fermentation system is used, which comes from the historic Michter's Pennsylvania Distillery, dating back to 1753. 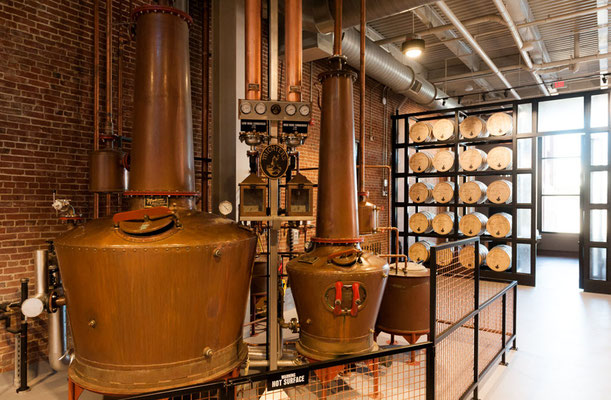 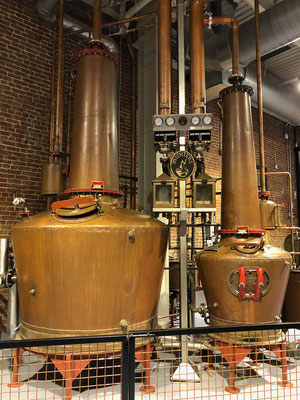 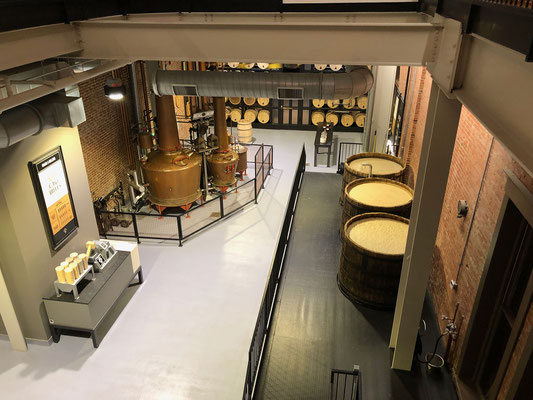 This is the opportunity for Søren to give us a quick history of the brand. In fact MICTHER'S was created by John Shenk, a farmer who built a small distillery to use his excess of cereals in the 1750s. The distillery was one of the first in the United States (it is because it was one of the first that Michter's adds a US*1 to its bottles) in 1753.

For the anecdote, SØren tells us that this whiskey was already so appreciated that it is said that General George Washington gave it to his men to strengthen them during the American revolution at the end of the 18th century. 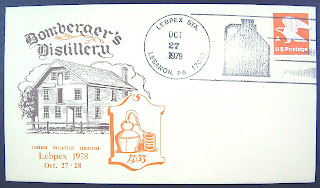 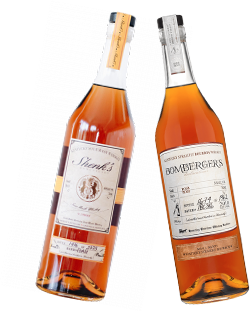 By the way, the distillery was not called MICHTER'S all the time. When it opened in 1753, it was in Pennsylvania and was called SHENK'S DISTILLERY. 8 years later it was bought out and called BOMBERGER'S & SON DISTILLERY. It was then closed for the first time during prohibition. In the 50's, it took the name of two sons Lou Forman who had just bought it: MICHael and PeTER (and thus its final name) still in Pennsylvania. It went bankrupt in 1989.

Finally in the 1990s, it was bought by Joseph J. Magliocco and Richard Newman (the current owners) and moved to Kentucky, keeping its name!

We finish our tour of Louiseville with the main part of the company, SHIVELY DISTILLERY, a large distillery located in the neighbourhood of the same name.

It is here that a large part of the production is done, from production, to ageing and bottling.

It is in this distillery that the company produces its bourbons, rye and other Sour Mash from a small Charentais still (on which it leans its image) used for the ironing, but above all from a large (or even very large with its 14 condensing trays) column still custom-built by the Vendome Copper & Brass Works company (with whom it has been working since the beginning in the 18th century). Imagine a column with a tray nearly a metre in diameter but above all 14 metres high! 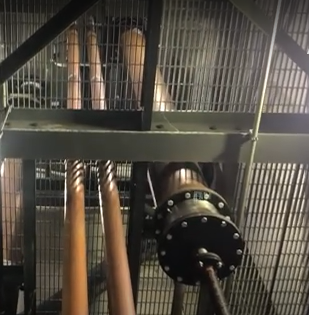 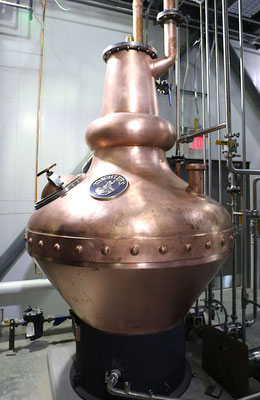 It is also in the SHIVELY distillery that the company stores all its small-batch whiskey in a warehouse that is subject to a greater temperature range than elsewhere. Indeed, thanks to ventilation systems, MICHTER'S whiskeys are subjected to more temperature increases and decreases (thermal cycle) than normal. This practice, which largely increases the share of angels, allows above all to increase the work of the wood in the casks and the exchange of flavours (should we have thought of that! -NDLR-).

Well, that's all well and good, but we would like to taste this whiskey ourselves!

Søren looks at us with a smile and says, we'll get there, no hurry ! I'll introduce you to it first!

Like all MICHTER'S whiskeys, the US*1 Toasted Barrel Bourbon we are going to taste today is issued from a SMALL BATCH (it is a small batch of small batch). SØren tells me that Michter's distillery is famous for its limited or single cask bourbons, single cask ryes and limited American whiskies.

This bourbon starts its ageing in a normal Kentucky Straight US*1 Bourbon cask and is then transferred to a second cask for 18 months, first air dried and then toasted.

This 2018 bourbon is only the third round of toasted (the first were made in 2014 and 2015) but it showcases the distillery's expertise on its casks. The aim of this method, which heats up the buttocks of the cask (without charring them), is to make the sugars in the wood more accessible. Indeed, under the effect of the heat, the sugars caramelise directly inside the stave and increase the flavour and colour.

The colour of this bourbon is (let's say typical) of these distillates on a light brown.

When the nose dips into the glass it will discover the fresh and sweet smell of corn (we'll say fairly typical of a bourbon) but more tense and fresh than normal. Paradoxically (although the alcohol content of this bourbon is "limited" 45.7%), it seems to be stronger in alcohol than the normal bourbon. It seems stronger in alcohol whereas it is weaker. Moreover, SØren reminds us that the distillery casks its distillates at only 51,5 % ABV (103°us Proof) when most of the bourbons are casked at 125° Proof, so at a higher degree).

The smell detected then slides over honey and a hint of spice.

The second passage presents a woody smell which further increases the ethanol effluvia but remains fresh. We detect a smell of brown sugar caramel but also a hint of spice.

The third passage is more marked by cloves and the sweetness of chocolate. A tagada strawberry can also be discovered at the end.

In the palm of the hand, the honey comes out but also the hint of smoke brought by the toasting of the wood.

In the mouth it is sweet and sugary at first. But soon comes a marked taste of spices and a strong woody taste. Then the spices make an even more pronounced return on the tongue. Then, this bourbon becomes sweeter and honeyed, even pastry-like (a vanilla custard). It keeps a certain harsh tension that could be assimilated to bbq smoke but it remains soft. After a while it fades on the palate, leaving a taste of honey and some spices.

The moment you swallow it you discover a strong return of the spices.

The finish is quite long with a surprising freshness to the taste and also a sweet woody side.

I know, I know you will say, it's a Bourbon and not a single malt but it deserved a little diversions before coming back to Europe.