Here we go again for the containment. Even more possible to go to the ceps to see if they go well with peated whisky (like last week) it is necessary to go back on board of my faithful BRADPEAT on the virtual roads.

To start with I'm going to stay in France once again, because if Scotchs are incomparable, you have to admit that there are beginning to be beautiful things in France.

Also, my new confinement trip will take me today to the Gironde estuary in the new MOON HARBOUR distillery in Bordeaux.

Before going to the distillery, my road stops in Bègles and it's not to buy a box of cannelés, no it's to pick up my guide of the day. His name is known because he had already participated in one of my tastings at Aberlour : SEBH. But today we will call him "Lapin".

So we set off with "Lapin" (a local economic leader specializing in the development of start-ups in the Bordeaux region and a lover of gastronomy and oenology - Editor's note), heading north of the city on the banks of the Garonne River at the limit of its confluence with the Dordogne just next to the new Cité du Vin.

After about twenty minutes aboard the combi, remembering the fake dishes of the Islay island that we rode our bikes, we arrive in an industrial zone in front of a most singular building. It looks like a blockhouse from the war, but it's much more cumbersome in the landscape! Fortunately in front of the building a panel on which is noted MOON HARBOUR reassures me.

"Rabbit", aware of all the economic specificities of the area, tells me that we are in the middle of a former German submarine base of the second war and that the building is nothing else but an old diesel tank! To finish the drums with diesel ! special ! But there too, he reassures me by telling me that the 50 m long building is only the concrete reinforcement that surrounded a diesel tank that had been dismantled a long time ago. Phew!

On the other hand, if there is no longer any taste or smell of fuel, the shape and configuration of the building (especially its thickness) makes it a great "warehouse" that could make people envious. When I tell you that there are good things in France !

So here is the set up : in one of the paradise of wine lovers and not far from Cognac, some die-hard Girondins have decided to make...whisky.

So "Lapin" explains to me that it is here, since 2017, that two friends Yves and Jean-Philippe decided to take up the challenge of making single malt. And who says single malt, says 3 years of waiting minimum! 2017 + 3 ! So I think we are here, end 2020 at the right time !!!

"Rabbit" tells me that the two associates, not content with having a place and certainly a fairly certain source of casks (we'll come back to that), wanted to leave no chance to chance and immediately produce a whisky worthy of the name. Also, he explains to me that when walking around the site it is not uncommon to come across a third partner before whom all whisky mortals must bow. He answers to the very Scottish name of John McDougall! He tells you nothing (miscreants !!) ? Well in fact we will say that without him no The Balvenie or Tormore in Speyside, no Springbank in Campbeltown, no Laphroig or Kilchoman on Islay... I'm going to go on and on and on and on and on. A name in the business for almost 50 years. 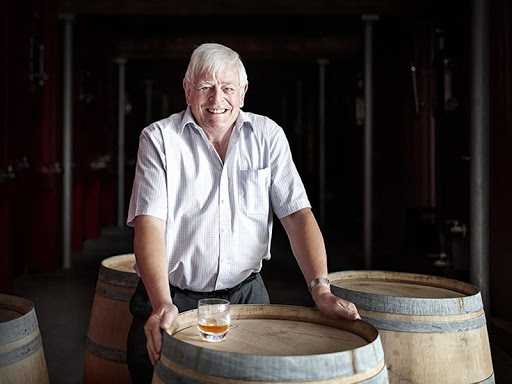 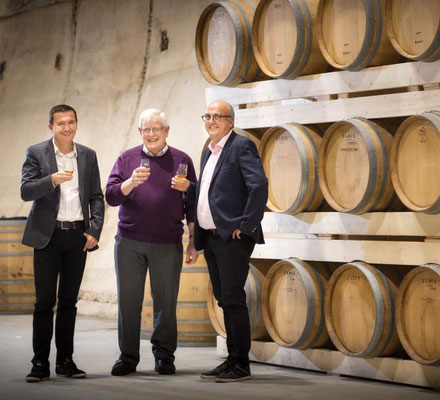 Everything seems to be there to make a beautiful whisky ! you have to taste it !

For the tasting we will go in the bunker but before "rabbit" makes me pass by the premises where the two Stupfler allambics (coming from Bègles - hold on - ) are heating to distill gently but in one pass barley grown on the island of Patiras (island in the Garonne estuary in the middle of vineyards). Like a foot of nose, it is barley that grows in the middle of the Medoc vineyards but without giving them shade. So we play in the local. 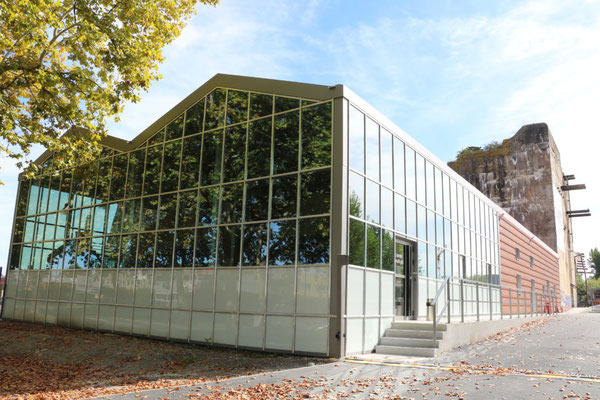 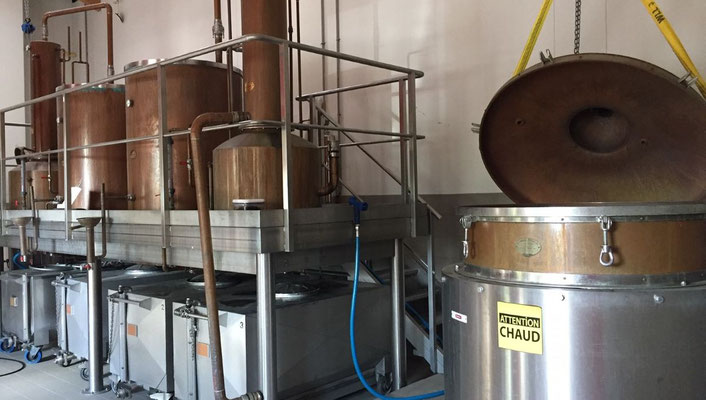 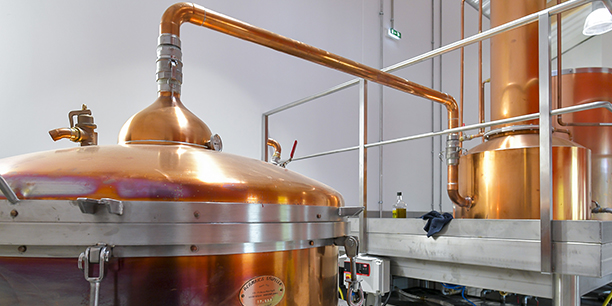 On leaving the production building, we find ourselves facing a strange "algeco" as if hanging halfway up the bunker! I tell "rabbit" that I don't think he is there only to proudly display the name of the distillery (which comes from the moon shape of the port of Bordeaux -NDLR-)!

Indeed, the latter tells me that as the owners wanted to make "even more" local, they decided to make the malted barley (for the moment in Issoudun in the Indre but soon in Charente Maritime) smoke-proof with seaweed from the Arcachon basin! He tells me that this strange building is none other than the famous smokehouse and is intended to give the maritime signature to the whisky.

What is missing at the distillery to make it more local? The casks of course!

That's why "rabbit" finally leads me to the famous bunker where barrels are peacefully sleeping... of Bordeaux wine of course! Grands crus of Sauternes (Château Rieussec, Château Haut Bergeron), and red wine (Château La Louvière, Château Pipeau) and many others who are waiting quietly in their silo.

Here we are, what a strange cathedral all in length and height not yet filled but which asks only that! Barrels of sauternais on 8 floors there is enough to do !

In front of us, a beautiful modern bottle (which will soon be marketed, I reassure you) all in roundness containing the new single malt (in the true noble sense of the term). It contains a liquid with the most atypical color. I haven't often seen this almost terra cota color that differentiates it from the rest of the range, already a nice hue, but much more red.

But where does it come from? Simply from 27 months in Sauternes barrels followed by 9 months in the Château Rieussec Grand Cru Classé barrels.

Concerning the barrels by the way, "Lapin" tells me that they are all the same size (225 liters are small to increase the liquid-wood contact) and that they are used raw without any heating or other burning so that the Sauternes tannins are also mixed with the distillate (hence a particular color).

So this 100% Bordeaux whisky, what does it give?

Even before plunging your nose into the glass, you can already feel the sweetness of Sauternes and a hint of pear.

Once well plunged in it, it is a great heat which invades us. It is woody and fruity. At the second passage a touch of sea air accompanied by the spiciness of pepper surprises the nose. Nevertheless, a nice smell of poached pepper is quickly added. When the nose comes back a third time in the glass, we discover a grape smell accompanied by a touch of smoke which brings back earthy aromas. It looks like peat but much lighter (perhaps the famous smoked seaweed?).

I toast with "Lapin" and start tasting it.

The attack on the palate is very frank and full-bodied with a strong contribution from the wine barrel.  It invades the mouth with beautiful ripe exotic fruits and a hint of almond. After a few seconds the harshness of the wine barrel is detected but also the sweetness of the honey. At the end the sugar turns into spices on the tongue and announces the end of the tasting.

Once swallowed the aromas that remain in the mouth are those of leather but also the ripe grape tannin.

This beautiful tasting makes us want to taste the version finished in casks from Château la Louvière (marketed since this week) softer and more vanilla-flavoured, or the one finished in casks from Château Haut Bergeron (planned like the one we tasted here for December). Nevertheless, we have to leave again. For "Lapin" it will be to go and help new start-ups and for me towards new tastings.