If you take a look at my map of France's distilleries that I proposed a while ago (see here) you will quickly realise that some production "nests" stand out.

There is a lot of talk about Bordeaux, Alsace, Brittany... and you will also realise that there are "areas with no production" (like the centre of France for instance).

However, it is still possible to discover people who are passionate about craftsmanship and traditional methods and who produce whiskies "made in France".

So, I suggest you go to Berry, to discover a craft brewery-distillery called OUCHE NANON (in Berrichon dialect in the text since it means Nanon's orchard, n° 27 on the map of yours truly), and to taste the good and organic "BERTHA THE GREAT" and "CARDONNACUM" there.

We headed for the market place of a village of barely 700 souls (of which France is full and which makes its charm -ndlr-) located halfway between Nevers and Bourges: the well-named Ourouer-les-Bourdelins.

Once there, it was hard to miss the brewery-distillery where I was going today on my faithful BRAD PEAT. It is located in the centre of the village in a typical house of the area and is adorned with a big sign "OUCHE NANON - FABRICATION ARTISANALE DE BIERE ET DE WHISKY". If you have ever had a bottle of OUCHE NANON in your hand, you won't be able to miss the building either, as it has been topped for decades by a peacock-shaped weathervane (the distillery's emblem, which can be found on the bottles)!

So it is here that I have an appointment with one of the sorcerer-alchemists (those who transform barley into golden liquid) of Berry: THOMAS MOUSSEAU.

Here "artisan" means that they distil directly in the shop in front of the customer who comes to buy his bottle of whisky and who quenches his thirst by drinking a local FEROX IPA beer.

As I enter the said shop and say hello to my host, I notice a certain smell of smoke!

Intrigued, I ask him if the building is not burning? He immediately reassures me by telling me that it is just his old Charentais still (named Bertha) which is working in iron as it has been doing since 2015 in this building (and since 1932 in an old Jura life).

Thomas explains to me that he is a fervent defender of tradition, that he is not looking for volume but quality. He has chosen to heat his "Bertha" on a wood fire (hence the smell of the place), right here in the shop, in the centre of the village, to give his distillates an extra "flick of toast".

It is worth noting that in this day and age, his kind would tend to be counted on the fingers of one hand! Proudly, he explains to me that I can look, I won't find a single electronic component nearby. Here distillation is synonymous with time, taste and judgement (imagine putting a GPS in a traction car...wouldn't that be ridiculous?). 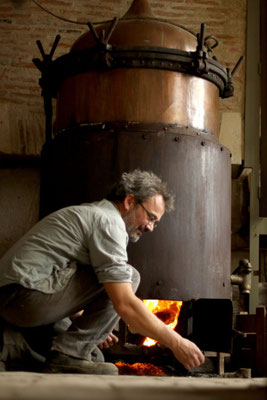 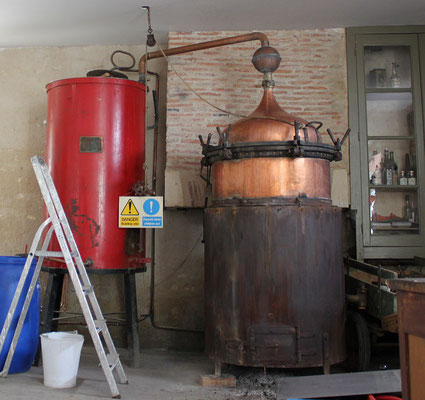 Continuing the tour, Thomas takes me to the back room where he presents the second Bertha. This still is bigger (1400 l as opposed to 400 l) than the previous one, but also newer. He is in charge of the first pass. I can also see in the room some of the barrels that contain the distillates destined for the next productions (the second part being in a mysterious damp cellar in the village).

He explains that the walls of the house in the village centre are not expandable, so he also has a building in the countryside where he has located all his (historical) brewing activity (brewing, fermentation and bottling managed by Matthieu Goenaere). Indeed, as is often the case, it is with this activity that he started in 2010 by offering organic beers.

He also takes the opportunity to tell me that, like his beers, his wash is also organic and that he tries to have the shortest possible supply chain. To do this, he uses barley from a neighbouring farm, has it brewed mainly at Les Maltiers in Issoudun (barely an hour's drive away) and favours local sales. 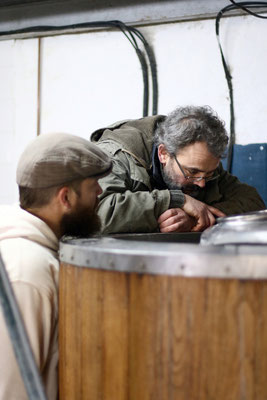 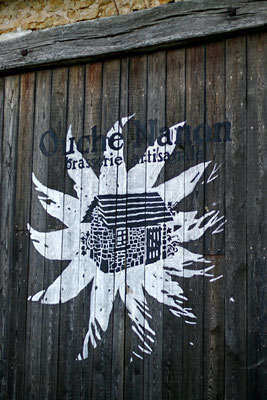 What better way to see if the organic whisky is good than to taste it! To do so, we return to the shop and get closer to the bar, without losing sight of the wood-fired still which requires careful control.

Thomas has placed the two bottles we are going to taste today.

He starts with the "BERTHA THE GREAT" with which he pays tribute to the 90 year old man who is warming up next to us.

This whisky, which has a beautiful golden copper colour, is of course made from organic barley.

As you approach the glass you can detect aromas of grape and wood.

When the nose is plunged into the glass for the first time it is very sweet with very orchard fruit aromas (light apples and pears and more pronounced peaches) but with a hint of the toast of a fireplace in the background (perhaps the Bertha effect?)

On the second pass, it warms up and is more focused on red fruits and releases some sweet spices (not too present and well controlled).

On the third pass, it becomes even rounder and loses power to the benefit of the buttery aromas of a Berrichon cake cooked in a wood fire.

The smell of smoke is more present in the palm of the hand, but it disappears quite quickly.

On the palate, it is discreet at the beginning, then it will clearly be carried on sweet and toasted notes. After a few seconds, we detect spices that spread quietly in the mouth (without violence).

Then some pungent wine barrel notes make a timid appearance. A light toasted aroma is also detected. The whole thing then rounds out to give way to notes of honey on the finish.

On the way down, it releases a grapey aroma and finishes with a long period of wood and smoke.

The empty glass is clearly on a hay barn but used to store wine barrels.

The second whisky he offers me, the "CARDONNACUM", is a child of the Berry, a little lighter.

Like his colleague, it is made from organic malt. It also started its ageing in ex-bourbon casks (but for 3 and 4 years) before being transferred to Chardonnay casks (and as everyone knows, Chardonnay comes from the Latin Cardonnacum - "where thistles grow" - finally!)

The approach to the glass is sweet and announces a certainly sweet tasting (although it is 45.5% alcohol compared to 42.6% for the previous one). A honeyed sweet.


The first passage of the nose will reveal a ripe pear, spices such as ginger more present and a hint of bitter almond in the background.


The second pass will reinforce its sweetness and will also bring notes of milk chocolate. One could perhaps recognise the pastry side of the Chardonnay.


The third passage will be more woody but in a pine resin version. It will also bring out peppery notes. Moreover, once out of the glass, the nose keeps the memory of pine.


On the palate, there is a mixture of sugar and vivacity. The woody notes of the wine barrel are quite remarkable. It will then soften and take on sugar but also spices that "tickle" the tip of the tongue and the back of the palate. Afterwards, keeping its woody side, it will nevertheless soften and become more honeyed and almost coconut-like.


On the way down, the woody and slightly bitter notes remain in the throat for a long time and leave a stick of liquorice lingering.


In the empty glass the spices dominate at first, before giving way to lemony notes, all blending with the hay. During this time the spices remain firmly on the palate.

Once the tasting is over, Thomas tells me to make a date because every year in December, the village of Ourouer-les-Bourdelins gets excited for the release of the LOST BARREL, the Distillery's annual single-cask.

And to announce that the one of the year 2022 will be peaty (my name is Peatdream !!) and after having spent 3 years in bourbon casks is sleeping in a re-burned pinot noir barrel of sancerre and having already aged a house plum brandy !

Enough to arouse a certain curiosity, no? See you in Berry in December!