When your name is PEATDREAM and the words SKYE, HEAVILY PEATED and New Distillery come to mind, you can imagine that something is going on!

What is it? SKYE's second distillery has finally bottled its first distillate?

That's all it takes for me to get into my trusty BRADPEAT, dressed in my best tartan, and to take the road (unfortunately still virtual because of the pandemic) towards the north-west of Scotland, towards the second magic island: SKYE.

I told you about it during a previous tasting at TALISKER, when we go to this island it is of course for the crazy landscapes, the haunted castles and the cliffs but it is (well it was) until then to go and taste the whiskies of TALISKER (that I continue to taste with pleasure I reassure you). But now, since 2017 and after 200 years of monopoly, we have to rely on a second distillery TORABHAIG whose 2017 - THE LEGACY SERIES we will taste today.

We have arrived at our destination. The TORABHAIG distillery farm! It's hard to miss it, it's written in big letters on the façade.

Attention peat lover, something is going to happen. Indeed, when I get out of my van I can only smell it: peat smoke! The big letters on the wall, the smell... I'm definitely in the right place.

For the moment, there is no living soul in this foggy morning on the island of SKYE. I am greeted by some Shetland sheep grazing quietly around a water tank.

After a few moments, I finally meet John MACKINNON who is wearing a distillery cap. He will be my guide today.

I explain to him that I came to discover THE long awaited second distillery of the island of SKYE.

For the moment we stay outside because he wants to show me the fog in front of the distillery, in front of the KNOCK BAY (because everybody knows that in Scotland, and even less in the islands, the fog always rises to let the sun shine). As we walked around the buildings he confirmed my first impression. They are not young. He even tells me that they are nearly 200 years old and that they were built with the stones of a ruined castle which had been built in 1630 (which must give them a mystical side when you know what lives in the ruined Scottish castles).

In passing he tells me that the building was not only chosen by the MOSSBURN company (owner) for its history but also because the pure water of the Burn Allt Gleann flows along its walls. He takes the opportunity to tell me that, as always, one of the most important elements of whisky is water and that the water flowing here (which also comes from the Burn Allt Breacach) is of great purity.

He also tells me that here we make peated whisky but that we leave the phenol figures to the purists because we want to make "tempered" peat. We'll call it what we want, but something tells me that we're going to have a real sailor's whisky that smells like a fireplace. Moreover, John confirms this by telling me that the barley chosen for the dried local is between 55 and 60 PPM (and that in the bottle the final is 16 PPM). A sailor's whisky I thought, but you know me, I'm PEATDREAM so...

Well, it looks like the mist is taking a bit longer than expected to lift, so John suggests that we take a walk around the distillery before coming back to the bay to taste the first distillate of TORABHAIG.

The age of the building and its external aspect are not to be trusted, as it looks like the distillery has been there forever. Inside you can see that we are in a distillery which is only 4 years old (and which has been distilling for 3 years). Everything is new, and although it is done in the best way, the tool is made to produce a few litres. A big mash tun that smells of peat, 8 whashbacks and above all two traditional copper pots (8000 litres for the wash still and 5000 litres for the spirit still).

Well, it seems that the mist is taking a bit longer than expected to lift, so John suggests me to have a look around the distillery before coming back to the bay to taste the first distillate of TORABHAIG.

The age of the building and its external aspect are not to be trusted, as it looks like the distillery has been there forever. Inside you can see that we are in a distillery which is only 4 years old (and which has been distilling for 3 years). Everything is new, and although it is done in the best way, the tool is made to produce a few litres. A big mash tun which smells like peat, 8 whashbacks and two traditional copper pots (8000 litres for the wash still and 5000 litres for the spirit still). 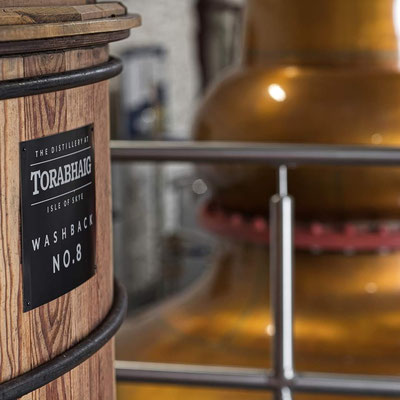 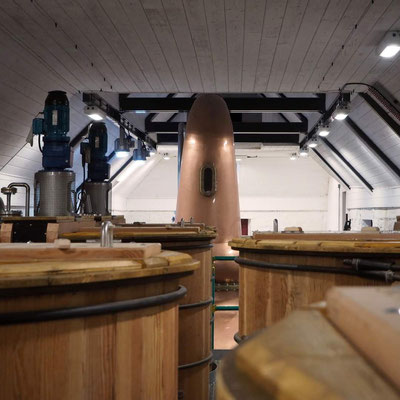 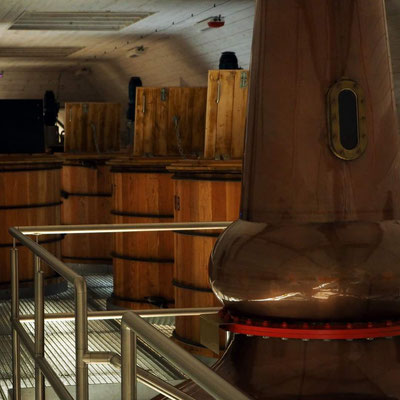 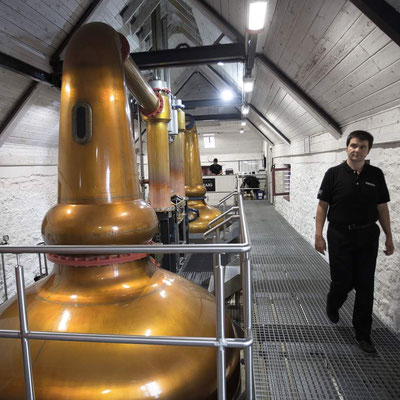 All the ingredients are there for a great adventure and for the distillery to announce 3 more series (LEGACY 2 - ALLT GLEANN, LEGACY 3 - CNOC NA MOINE and LEGACY 4 - ALLT BREACATCH) before arriving at a 10 year old which should overshadow another 10 year old from the region (need I say which one?).

Before going to taste the distillate, John finally tells me that without the men beautiful and gleaming stills would not be enough. He also tells me that the whole TORABHAIG adventure is based on experienced men who have been making whisky for a long time, but also on the transmission of knowledge and the training of new generations.

After this overview, it is still in the beautiful scent of peat smoke that we return to face the bay, but this time, John has in his hand a square-shaped bottle which proudly displays the indication FACONNEE par SKYE!

The whisky that John pours into my glass is a light golden colour that shows its young age (just over 3 years) and a passage through a single bourbon cask.

Something tells me that this is going to be a real whisky in the pure rules of the art.

With my nose in the sea breeze, I try a first approach.

Away from the glass the peat lover is warned and will not be disappointed. Without even sticking your nose inside, you can detect the smell of smoke but also a certain lemony freshness. On the other hand one will not be completely on a chimney fire but more on a day after a heather fire in the fog.

When the nose enters the glass for the first time it will detect the frank presence of peat buns from the drying of the barley. Nevertheless, there is no aggression and this soft smell of sweet smoke blends very well with very fruity notes (which will be in turn that of a ripe pear, then that of sun-drenched fruits such as banana or mango).

The second passage will confirm this sweet/smoky atmosphere. It seems that the fruity notes are concentrated in the centre of the glass when the smell of smoke comes to line the sides. However, if you leave the nose in the glass, it's then the peppery and woody notes that make their appearance and betray the age of the distillate.

This first opus of this new distillery from the Isle of Skye has a certain maturity, as its youth has been able to show some gallantry and to leave the good part to the peat.

Before finally tasting this distillate, a third pass of the nose is necessary. It will allow to detect marine and still peaty notes but now more acidic and herbaceous.

A drop in the hand will confirm the presence of a fresh and lemony peat.

As if he was the one giving the go and as John had told me, the misty sky tore in front of us and let the sun's legs pass. It was time for a taste.

"Slainte mhath," John says, clinking his glass against mine.

As it enters the mouth, the distillate confirms its announcement. A very sneaky hint of lemon bitterness can be detected, but it soon gives way to the roundness of the peat.

The palate is adorned with smoke but becomes sweet and spicy. I think that these spices betray the young age of this whisky and may diminish with longer years spent in cask. I reassure you right away that the spices are not very strong and that they leave more room for sweet notes such as ripe pear and a distillate that becomes smooth and honeyed. A brief passage of star anise is detected but the roundness remains until the end of the tasting.

Once swallowed, the memory of this whisky is moderately long but it will leave a smell of smoke and liquorice stick on the palate but above all a certain mellowness on the tongue.

Looking at John I almost wanted to applaud. I clearly think that with a first distillate of this level we are likely to hear about the shadow that the smoke from the south of the Isle of Skye will cast over the north.

It is on these beautiful smoky notes and now on a beautiful sun in the Skye that I must leave my host to take BRAD PEAT to new peaty adventures.