Back from the country of the rising sun (see the previous adventures), I'm going to make a stop in France (once is not customary) to taste a whisky...Scottish!

My faithful Brad Peat will stop in Bourgogne for this particular comparison. Two whiskies from the TULLIBARDINE distillery but with "French style" finishes.

We are going to compare the TULLIBARDINE 225 SAUTERNES CASK FINISH and the JACOULOT 13 YEARS. Indeed, this second whisky, under a HIGHLAND WHISKY appellation, turns out to be no more and no less than a TULLIBARDINE for which a finish in casks of old Bourgogne marc from the house of JACOULOT has been used.

Of course the two finishes of the same whisky will certainly be different, because on one side we have a white wine (certainly sweet but still a wine) and on the other side a digestive (with a strength and a taste obviously more marked) but you never know.

So before we start, let's see the strengths that are present.

Let's start with the Justice of the Peace (common to both bottles): TULLIBARDINE. Let's make a little voucher to the Highlands in Scotland. We are 80 km north of Edinburgh in the small town of Blackford near the hills of Ochil, on the banks of the Danny burns in an old brewery dating from the 15th century anyway (royal because King James IV found good beer there -but that's another story-) transformed into a distillery in the 50s.

Here, we like the well done craftsmanship and especially for a long time the finishes in wine barrels. Listen, after having the distillates coming out of the 4 stills in bourbon casks, many of them will pass through sherry casks (of course), but also, what is a little less common, Pinot Noir (from the beautiful and noble Bourgogne house Chassagne Montrachet), Château Neuf du Pape (what a beautiful country France is), Marsala (Sicilian) and thus in Sauterne as far as the one we are interested in today is concerned. One also finds finsh for others (which will also interest us) with that of JACOULOT.

Let's go back to French soil to first talk about the TULLIBARDINE 225 SAUTERNE CASK.

So like all good TULLIBARDINE, it first passed through bourbon barrels before finishing its journey in barrels (225 liters -NDLR-) of Château SUDUIRAUT (1st growths classified of Sauternes since 1855 anyway -there are only 11 -NDLR-). So we can already imagine a hint of added sugar. We'll see !

In front of him I propose you a real and beautiful discovery with this 13 years old JACOULOT whisky.

For the history, the house JACOULOT, located in Romanèche-Thorins, south of Macon, has been distilling Bourgogne Marc since the end of the 19th century. It therefore also buys distillates aged in bourbon casks before pouring them into its barrels of old Bourgogne Marc (the one used for the tasting will have been distilled in December 2002 and put into 570 bottles in June 2017). 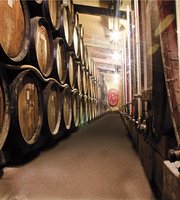 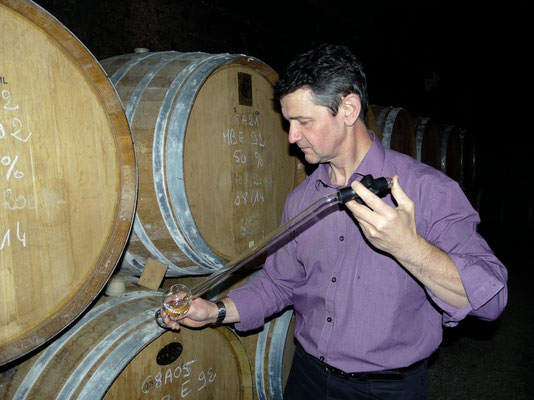 Ok, no more chauvinism, they are not French whisky but Scottish (let's give Caesar back what belongs to him) but French-style finishes. So on the one hand the cask will have contained a sweet wine (whose honeyed and fruity aromas could be similar to those of a marc) and on the other hand an alcohol distillate known for its roundness, its notes of fruit and honey).

On the color side, the two distillates have a beautiful golden color with a very slightly browner tone for the JACOULOT.

As far as TULLIBARDINE is concerned, the first nose is going to be quite fruity but in a rather brief way because quite quickly, without having time to get out of the glass, it is pricked with peppery notes. When they appear they are accompanied by a slightly country side with a hint of hay.

Fortunately, after having resurfaced to prevent the pepper from "rising too high to the nose", a second passage will bring back sweet notes of a ripe grape, as in the case of Sauternes, which has been under the domination of botrytis cinerea (noble rot that settles on the grapes and gives the taste of the harvest -NDLR-).

Shall we go back? The third passage is significantly different because it will reveal lemony notes but also a hint of vanilla.

As for the JACOULOT, the impact of the barrel is obvious. Distilled alcohols certainly leave very strong impressions on the wood.

Also, the nose will first detect the effect of the pomace because it is sweet and could "almost" resemble a hint of sherry with red fruit aromas. The sugar effect is very pleasant.

At the second passage it becomes completely pastry. Imagine letting your nose revel in the smell of an apricot Oranese (caramelized paw, almost candied apricot...). Frankly magnificent. The third passage is going to approach that of the TULLIBARDINE with a point of pepper which is going to come to tickle the nostril.

I confess that I might have a slight preference for the smell of the second one because the peppery contribution comes at the end and won't tend to pollute the other smells as in the first one (but it's all personal).

And in the mouth then?

The entry of TULLIBARDINE is done in fanfare with a rather marked woody taste. This impression remains quite present but after a while it will give way to honey and even ripe pineapple almost candied. One will find a certain astringency on the tongue (certainly due to the barrel of Sauternes). At the end the sugar will disappear and give way to citrus notes and a hint of pepper which had almost made us sneeze in the nose.

The journey in the mouth is nevertheless very interesting.

Once swallowed it will leave long spicy notes and a nice freshness in the throat.

As for the finish Bourgogne marc, the entry in mouth is much warmer, we would tend to curl up in a hot caramel (well ok it must burn a little). However we will feel much earlier than in the previous one the astringent notes of the barrel. Luckily we find our Oranais which had made us envy to the nose with a little taste of honey put on it.

The end of the tasting is quite close to that of the first one with a final in mouth bursting on woody notes.

Once swallowed, this version obviously has no "marc" from us (sorry), because it will be there as long. On the other hand, it will be much warmer than the first one with spices.

Here I leave you judge to make this test you also, in addition the price of one as of the other will not exceed 60 € what is correct taking into account work carried out. You won't have too much difficulty to find a TULLIBARDINE 225, on the other hand, it will be a little more difficult to find a 13 year old JACOULOT because the production is limited (personally I have a source in the Cantal, but shhh, there are not many).

After this little Franco-Scottish comparison, I'm going to go back to my BRAD PEAT but I'll stay a little bit in France further south in the south (...) to go back to the UK later for new tastings (that's the advantage of virtual travels : we see nice people and we don't make quarantines !). 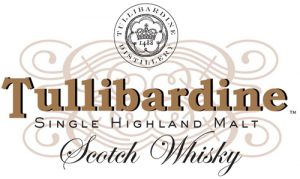 Back to comparisons
All peadream.com tasting notes
Main menu