The story of the tasting of this Limousin whisky from the Brasserie J. MICHARD (which I mentioned too quickly when I was in New Aquitaine here), does not start in a distillery but in the middle of the Limousin forest (you know, the one where we find the wood that is used to make the beautiful barrels used to age the whisky), west of Limoges, on the border of the Dordogne.

While passing through the region on board my faithful BRAD PEAT, I have an appointment for a day of fishing at the Etang de Graffeuil, one of the paradises of the Limousin carp fishermen, with my favourite godchildren whom I will name here "mirror and leather". No, they are not Pokémons but names of carps but it is for anonymity and to avoid any jealousy of the other fishermen to see here their exploits related (if you are interested, I advise you to make a tour on their FACEBOOK here). I am also accompanied by their father, whom I would call "the best bait ball thrower in the bilingual category".

Here we are in the calm of this beautiful spring day teasing the carp on the edge of this magnificent pond. I have already had the opportunity to tell you about my piscicultural exploits during a previous tasting much further north in Europe (if you are interested it was at the tasting of the Fettercairn 16 years old here).

You will say to me, but what does this have to do with the J. MICHARD whisky? Well, simply a fishing party can be long, especially for a poor fisherman like yours truly, especially when you are facing professionals of the genre who catch common carp, each one bigger than the other. Also, I found myself rather quickly with my friend "the best bait pellet thrower in the bilingual category" a glass in the hand tasting the endemic whisky: I named the one produced by the family MICHARD Father and Daughter (but I will come back to it).

Before moving on to the discovery of the Brasserie bar on the Denis-Dussoubs square in Limoges, you should know that the day's fishing ended with a ridiculous 500 g carp (almost a bonnet as they say) whereas "miroir et cuire" had caught monsters weighing several kilos!  We are not all equal in fishing. 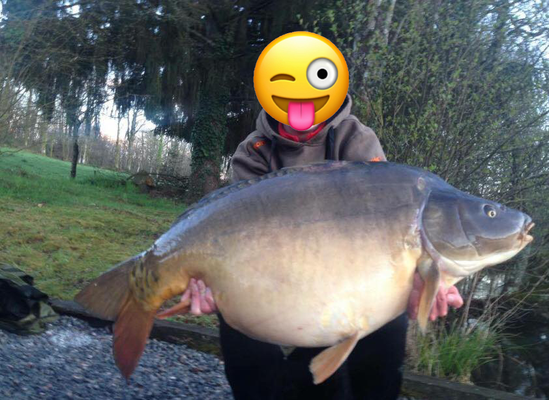 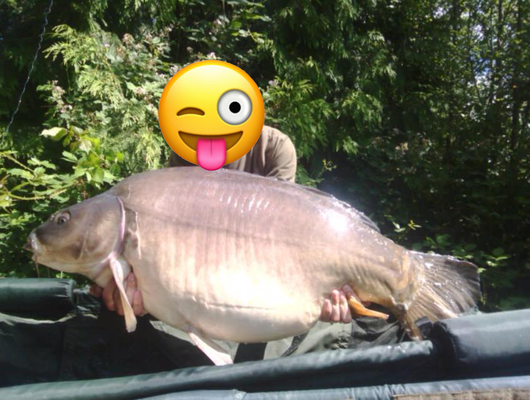 In short, this day allowed me to discover the whisky produced by the former Brasserie Saint Martial (now better known as BRASSERIE MICHARD) and above all to learn more about it.

Leaving "mirror and cook" for a long afternoon and night of fishing, we left with "the best bait pellet thrower in the bilingual category" in the direction of the city centre of the Limousin capital (without fish in the trunk as in the past) to find out more about this traditional distillery.

When I left the city a few years ago after my studies, I had had the opportunity to taste the beers of the house (it was created in 1987) but there was no whisky yet. Above all, I had stayed with the craft brewery created by JEAN MICHARD (which was one of the first three French craft breweries at the time). I thought to myself, how can they continue to make beer (and now whisky) in their bar in the city centre?

When I got there, over a pint of their coffee-flavoured dark beer, I was told quite a few things.

First of all, I was told that since 2002, Jean MICHARD was no longer the sole owner, but that he was accompanied by his daughter Julie.

Then they explained to me that the production of the bar was now marginal and that I had to go to the north of Limoges next to the Ester flying saucer to see the production tool where everything is made since 2008. I was a little late! 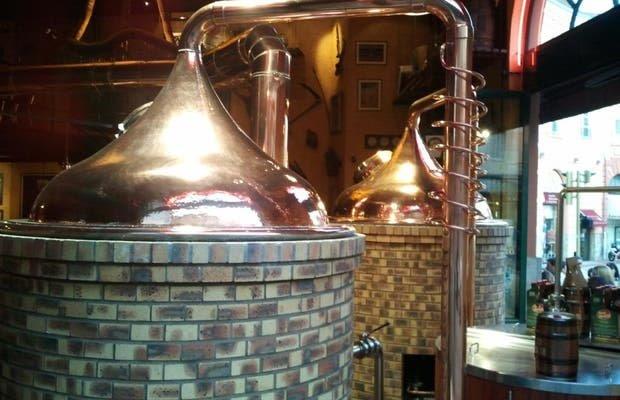 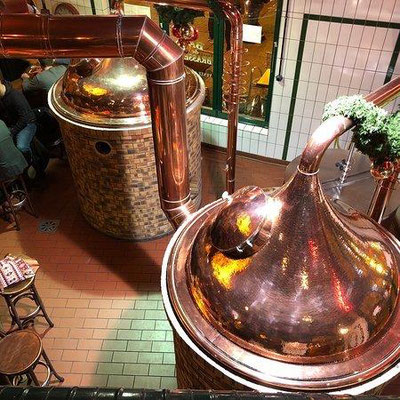 So we set off in the direction of the famous flying saucer (or upside down porcelain plate, this is Limoges after all) and arrived in front of a building that was obviously more in keeping with the size of the current production and which could clearly hide a still. The building was even big enough to house a large restaurant with checkered tablecloths and an October Feist atmosphere!

We were welcomed by the lady Julie, who is now the hostess and supervisor of operations.

She explained to us that the production of whisky, which was anecdotal at the beginning in 2012, was certainly not yet industrial but that it was making its way (about a hundred barrels in gestation).

She explained to us that part of the specificity of MICHARD whisky lay in the use of live yeasts (sugar-eating beasts) similar to what the brewery used to ferment its juices.

She showed us the gleaming stills (Holstein and column stills) that sit in the centre of the building. She also told us that the production was reduced by the wish to optimise (and therefore limit) the heart of the heating (never distillate below 85% alcohol) leaving either a large distillate on the floor or another large volume more likely to go through the furnace a second time.

I told him about the fishing trip, which made him laugh (was his father Jean a fisherman himself?) and above all my questions as a whisky lover about the house distillate. 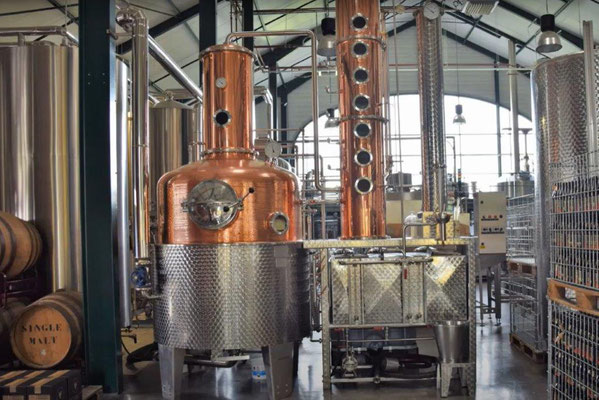 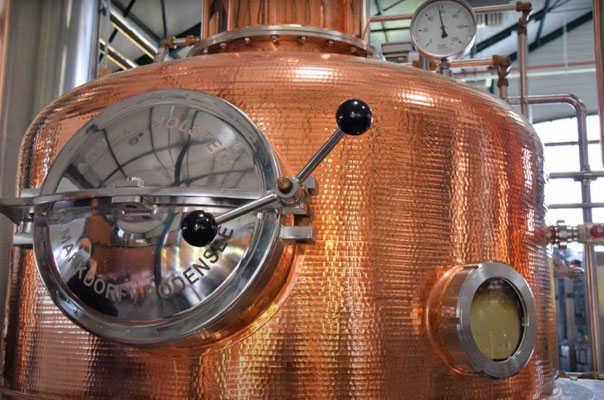 Before pouring me a glass of this distillate with a brown colour like an oak from the Limousin forest (go on, one more! but I reassure you that BRAD PEAT is equipped with an alcohol test and refuses to start if it is not within the authorised limit) to taste it, she explained to me that the MICHARD whisky (the only one available for the moment) was an 8 year old whisky and that it had been aged in American bourbon oak barrels and new Limousin oak barrels!

So what about tasting it?

The overall atmosphere is going to be sweet!

When the nose enters the glass it will discover sweet notes of vanilla and caramelised apples. To this warm impression will be added a floral touch and even a nice stick of liquorice.

On the second pass, its woody side will appear more marked with a smell of freshly cut and still green wood. A slightly medicinal appearance, perhaps exacerbated by the use of the famous house yeast.) One can detect aniseed and even spices when one lingers bravely in the glass.

The third run softens and returns to the sweetness of the first run, bringing a pastry-like quality.

The smell of malt comes out well in the palm of the hand.

That's not all, but you have to taste it (again)!

On the palate, the 43% alcohol seems well controlled. It brings the right amount of warmth that the nose had detected. On entering the mouth the palate discovers a warm and sweet apple taste. The palate is tickled by spices. The pastry side detected on the nose is well present with a sweet taste of vanilla and cinnamon that counterbalances the spices on the palate. After a few moments a slight tartness is detected, certainly brought on by the new casks, but the overall note is clearly sweet.

Once swallowed, the finish is quite long. It may be more bitter due to the yeast, but the rest of the finish will be aniseed.

The empty glass will remain on vanilla and ethers.

She finished the tasting by making our mouths water once again and by telling us about a little 15 year old nugget that has been aged in sherry casks (which will perhaps bring some red fruit and soften the finish who knows)!