Today I'm heading to the North of Northern Scotland to visit my friend Mark W. (for anonymity) who wants us to taste the peaty reference of the WOLFBURN distillery: the MORVEN.

Aboard my faithful BRADPEAT, I am on the A9 road heading north and I decide to take a short technical break a little before the then snowy little village of LATHERON (which is on the seaside at the crossroads to the north). Before heading towards THURSO, I decide to enjoy the landscape.

Not far away we can see the highest peak in the area, Morven montain (perhaps it has something to do with our tasting of the day as we are only an hour away).

I decide to go towards the sea, and I quickly understand why the peated whisky from the distillery took its name just as my feet are sinking into the soft and wet ground! Peat bogs! The soil of the region is mainly made up of them!

After a few metres, which my shoes will remember, I find myself facing the sea on the top of the cliffs with the white walls of Dunbeath Castle not far away. The North Sea sea spray is blowing my cheeks and giving me the little boost I need to finish my journey.

As I look down at a small boat stranded below, I see a black mass emerging from the water. A seal!

However, if I look closely, it seems to me that it is standing well on its legs (quite unusual for a seal). When I look closely, doubt enters my mind. Then as I look again, the shivers start to run through my body (and I don't think this comes from the snowy fields around me). It looks like a big dog, or...a wolf!

Then I remember Mark (and the box of WOLF BURN bottles) telling me about a creature that is half land and half water, the SEA WOLF (the mytic creature that "lives both on sea and land"). And I had mocked him when he told me about it !

Hoping that the thing hadn't seen me yet (and although I remember the legend that says that its sight by a human brings him good lucidity), I decide not to linger on the East coast and to take my way back to the north.

After an hour's drive through the snowy roads, I finally saw in the distance the pointed bell tower of Thurso church and its bay facing the Pentland Firth.

Arriving in front of the distillery, I find my host in front of the famous representation of the WOLFBURN and take the opportunity to tell him about my travel adventure. He tells me that people who have had the chance to see the SEA WOLF are quite rare !

Before tasting, we take the opportunity to discuss together the latest rock news (very weak considering the current situation) and the latest concerts (even weaker or non-existent news). It is the occasion for us to recall the musical tasting that I had proposed with that of the LANGSKIP.

He then leads me through the young distillery and tells me a little about its old and recent history.

In fact, he tells me that the WOLFBURN distillery was created along the watercourse that runs through the town of Thurso, which bears the same name, but a little further on. And above all, he tells me that it was 200 years ago in 1821, by a certain William Smith.

He then explains to me that it had its ups (which made it one of the largest distilleries in the north of Scotland at the time) and downs (which caused it to close in the 1860s).

He then tells me that after 150 years of closure and a few years of research, like a phoenix (or in this case a SEA WOLF rising from the waters), it was reborn in 2011/2012 (on the current premises).

He then ends by telling me that the spirit wanted by the distant successors of William Smith is to stay on a local and artisanal production (without forgetting the quality). This is why the tool put in place by the new team is meant to be artisanal and largely manual. From the grinding of the Grist to the putting into barrels, through fermentation and distillation (in the two unique dodus stills). 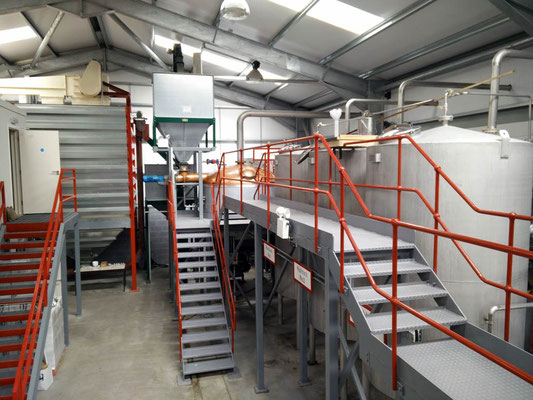 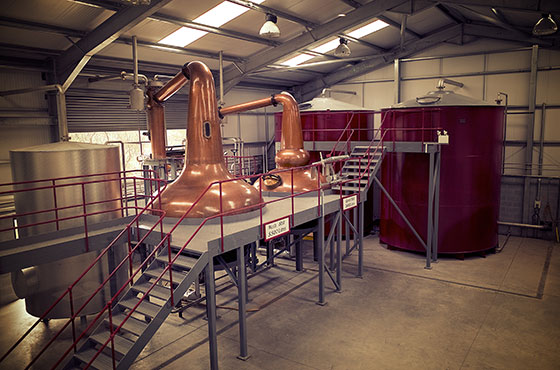 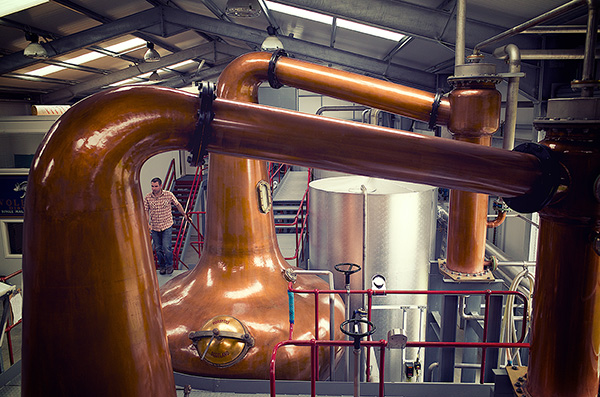 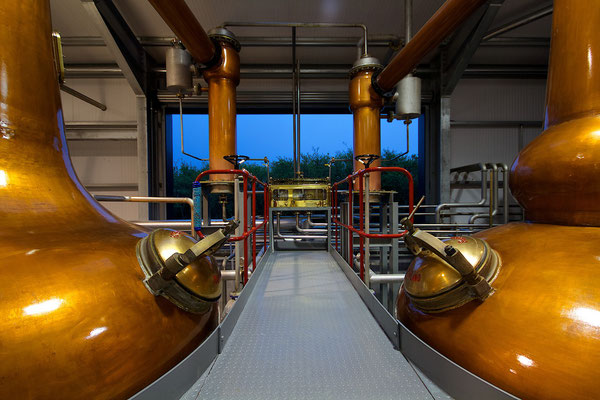 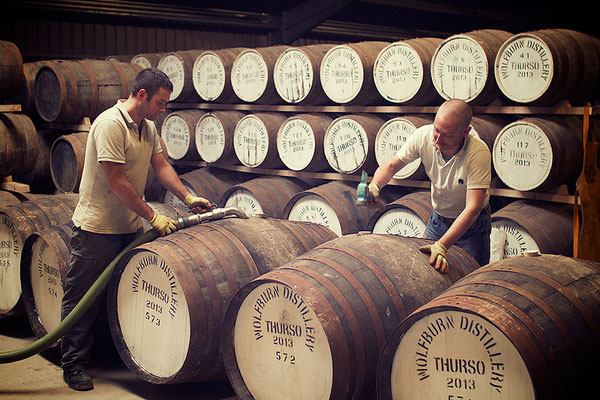 Also, 150 years after the last drops of alcohol, a new distillate came out of the spirit-still on 25 January 2013.

In 2014, true to its origins, the distillery decided to start producing a whisky worthy of its origins: a peated version. For 6 weeks (and this has been done once a year), barley dried in peat smoke (at 10 ppm, we are looking for subtlety and not power) is crushed and passed through the stills. And this is how since 2017, 3 years after the MORVEN is bottled and will slide into our glass today. The MORVEN has been added to the 3 other references of the range: NORTHLAND, AURORA and LANGSKIP.

Finally he tells me about the small annual SMALL BATCH series bearing the number of the barrel from which they are taken. 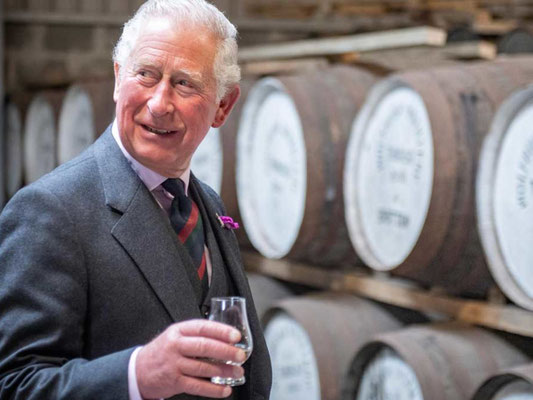 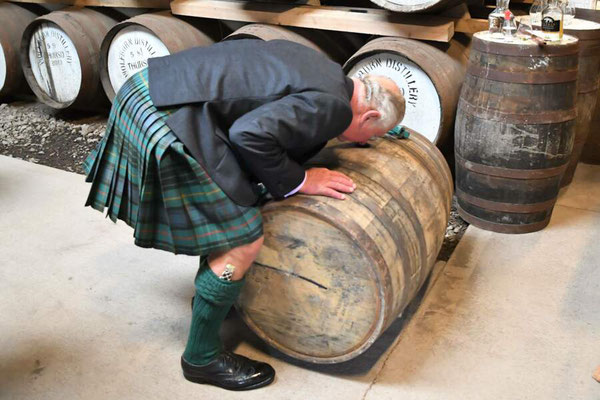 Let's move on to the tasting but first of all let's see a large part of its character through its ageing. Mark tells me that the light gold-colored distillate has spent 3 years, half in old casks from the magnificent Islay (second filling) and half in bourbon casks (first filling).

When the nose approaches the glass, it detects directly what we are dealing with: a peated whisky without any doubt.

We have confirmation when we dive straight into it. The peat is clearly there. It is quite fresh and is accompanied by a little iodised air. The first notes show a whisky with an agricultural air (in the noble sense of the term): hay and heather.

The second passage will turn out to be a little sweeter with a slight smell of pear but mostly of caramel. To these sweet notes are added those of spices when the nose is left too long. The third passage will go towards vanilla but is accompanied by a hint of cigar smoke on the day after a party. Ah the mysteries of peat smoke.

Time to wish " Slainte Mahth " to Mark and we get to the heart of the matter.

In the mouth it is a mixture of freshness and pastry texture. A volley of ripe fruit accompanied by spices that come to settle and sting the tongue. Then comes the smoke from the peat which warms up the whole. This warmth translates into a taste of caramelised hazelnut and then the texture of honey. The spices, which have remained discreet, reappear and fill all the corners of the mouth and give the signal for the end of the tasting.

The finish is quite long and leaves a hint of soft caramel in the throat. Once this sweetness has been attenuated, the peat smoke and spices remain in the memories for a long time.

Here we are with Mark tasting this good peated whisky and talking music but the clock is ticking and I will have to continue my journey on BRADPEAT to new adventures.