The advantage of virtual travel is that it simplifies travel. So, as soon as I left the cooperage of THE BALVENIE Distillery, I climbed aboard my trusty BRAD PEAT and in a snap of the finger (à la Thanos) here I am propelled to the island of Hokkaido in the north of Japan! What a leap!

And why do you tell me? Well, just because my name is PEATDREAM and I want to taste the only peaty Japanese whisky that is: YOICHI (this will be YOICHI SINGLE MALT).

Here I am in a corner of Japan which paradoxically looks very much like my starting point. It feels like Scotland, yet we are 50 km from Sapporo on the shores of the Sea of Japan: greenery, forests, peat bogs, sea air ... When I get out of BRAD PEAT, I also realize that the bottom of the air is rather cool!

On the banks of the Yoichi River in the town of the same name (well, well, well!), I'm on route 229 in front of a corner entrance porch that gives me the impression of being in front of a fortress that seems impregnable. On the left and on the right, a long stone building. Above the porch are small windows that look like loopholes. There are even battlements (a real Scottish castle...again!). Everything seems peaceful here during this confinement. As if Japanese Zen is pushed to its extreme!

We have an appointment with old Naoki who will be our guide for the day. He has the keys of this impregnable fortress and will guide us there (and I hope to make us taste some beautiful things). We can't give him an age, but according to some people, he would have worked with the late master of the place, I named the venerable Masataka Taketsuru.

So our host welcomes us and leads us through the buildings. Once past the porch, not so impassable as that, we find ourselves in front of other stone buildings with large red roofs. As we walk through the buildings left in their original 1934 Japanese style, old Naoki tells us stories of the great hours. He tells us about his important role and the confidence Taketsuru had in him. Indeed, Naoki was in charge of the heating in the distillery. He tells us about the time (before 1970) when the distillery used peat from the Ishikari plains to stop the germination of its barley (a practice which stopped since then with the importation of the already malted barley from Scotland).

Naoki leads us through the distillery towards the wharehouse where he promised us the tasting of single malt, passing in front of Rita's house (Taketsuru's muse and wife without whom the whisky making would perhaps never have seen the light of day in Japan). 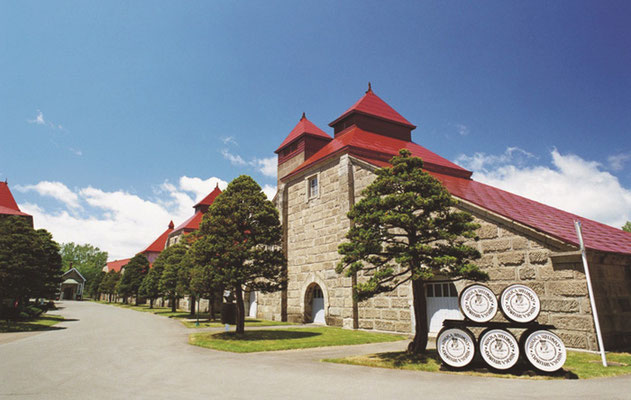 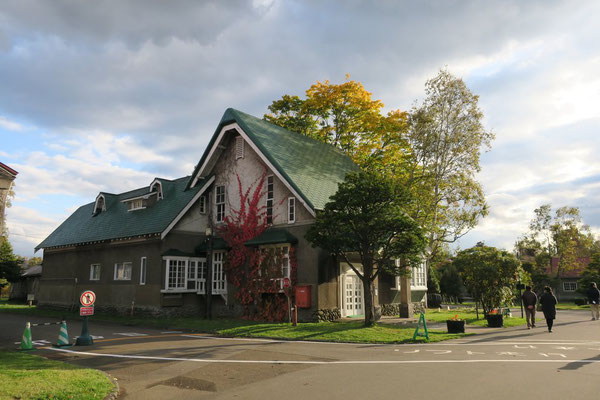 It takes us back to the time when it was decided to heat the onion stills with an open flame (an artisanal practice which is still maintained today in the distillery, although it is too complex to manage and has long since been abandoned in Scottish distilleries) requiring a heating manager who is on the lookout for the slightest variations in temperature.

Finally, he tells us that the stills in question produce very different whiskies because they are made from a wide variety of barley (very peaty, not very peaty, or not peaty at all) in order to produce a wide range of aromas for the blends of the brand (in Japan we do not share our casks, we create with what we have). 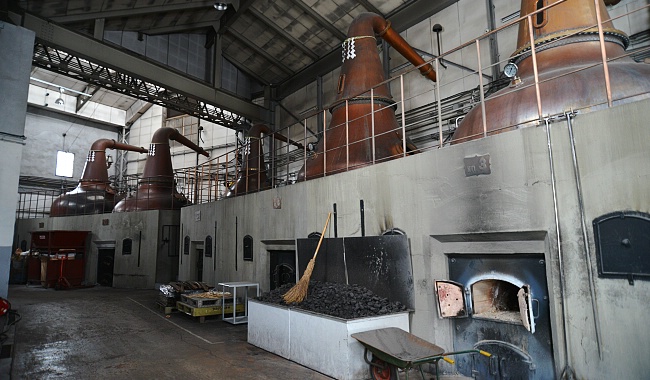 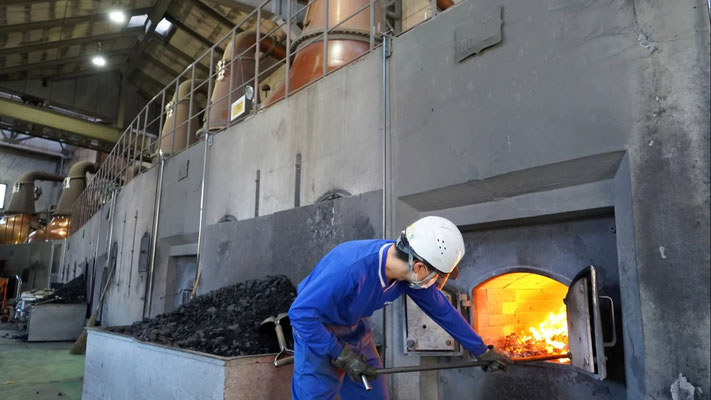 We finally arrive in front of the door of the long wharehouse to the sound of the historical anecdotes of our host. Among them, he tells us that he even knew the "king of blenders" recognizable on the bottle of Nikka Black 8 years old (but I half believe it -). The building is low and made of clay (since nothing is left to chance here, we don't just age the barrels in the sea air we let them touch the ground). 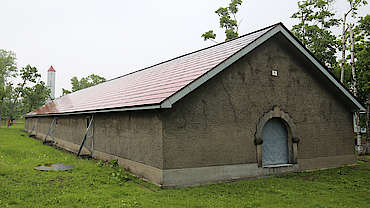 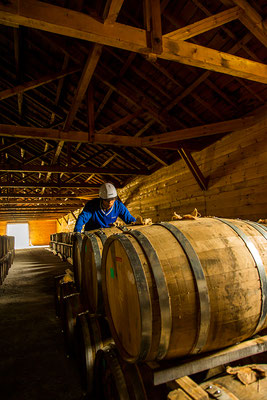 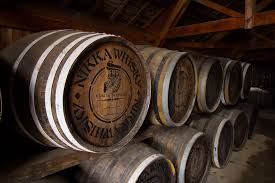 Naoki shares with us his concern about the trend of Japanese distilleries which, faced with a growing worldwide demand, would tend to make either whiskies without any age reference, or the opposite of elitist and very expensive whiskies (I remember the magnificent NIKKA TAKESTURU 21 years old bought 100 € by my wife about ten years ago and now flirts with the 450 €!)

Exit then the 10,12,15 and 20 years old (whose rarity and price curve would have an exponential trend) today Naoki will make us taste the recent but already quite widely awarded YOICHI SINGLE MALT (silver medal in 2019 and gold medal in 2020 for the best Japanese ageless single malt at the World Whiskies Awards).

So it's on the clay floor that Naoki pours us a golden liquid (that the slightly smoked bottle had masked us), and introduces us to his guest.

For the 50th anniversary of the sister distillery Miyagikyo, Nikka has made a big splash. Under this very basic name, he offers us a whisky made from a blend of distillates coming out of the stills since 50 years (we can however assume the most recent ones in larger quantities, but this is just a personal thought). Anyway, the single malts that compose it are either made from new oak casks, or from sherry casks. A blend which should give roundness to this often marine whisky. 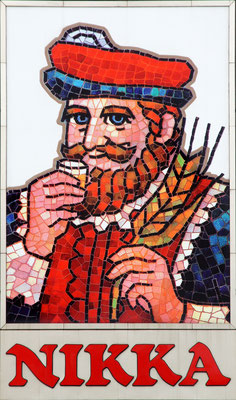 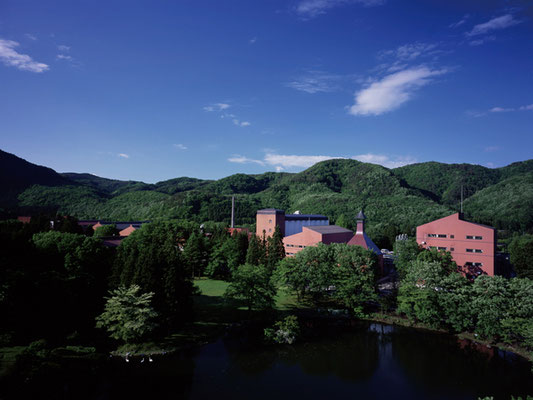 Even before the glass is filled to the brim, the nose is invaded by a beautiful vanilla scent, preparing it for a certain sweetness.

When it enters the glass more frankly, the aromas become fresher. At the first passage my right nostril detects iodized and fresh smells coming from the nearby sea. The left will be more of the warmth and the softness of the sherry. An original fresh sherry aroma that makes the first approach to this whisky soft and mellow.

It is during the third passage that a hint of peat smoke stealthily makes its entrance but is quickly overtaken by the return of a hint of vanilla and then by the spicier aromas of a cinnamon stick.

Naoki launches us: " kenkō " sign that it is time to start this tasting.

The attack in the mouth of this 45% whisky is more pronounced than one would expect. Much less sweet than what the nose announced, it is marked by the strength and freshness of iodine. It even has a hint of bitterness, which is then rounded off with aromas of ripe fruit but not too sweet. On the palate it softens with a hint of bitterness on the tongue until liquorice and aniseed aromas appear on the sides of the mouth.

Once swallowed it leaves lemony and marine notes with a very slight hint of peat.

Unfortunately it is already time to leave because it is soon time to go for a walk in one of the city's sentôs, before leaving for new immobile adventures.