Today, we are going to taste one of her achievements of 2019: the DEWARS DOUBLE DOUBLE SERIES 21 YEARS OLD.

To do this, I leave Speyside and head south of the Highland in my Brad Peat, just below the Cairngorms National Park towards the small town of Aberfeldy. Does the name ring a bell? Not surprisingly for whisky lovers. But if the town of Aberfeldy is home to the eponymous distillery, it is also the showcase of one of the biggest whisky companies in Scotland: JOHN DEWAR & SONS ltd. You can't go wrong, it's written in big letters on the barrels in front of the distillery : HOME OF DEWARS !

So here we are in this beautiful distillery (but I'll describe it another day) because today the appointment is made to taste a 21 years old blend in the secret bar it hides.

Before reaching the famous Scotch Egg Club, I advise you to go through the blending room and the original stave corridor, without forgetting to sign one of the casks in the tasting room.

But here we are in the mysterious hidden bar (often reproduced in lounges around the world), but here for real! 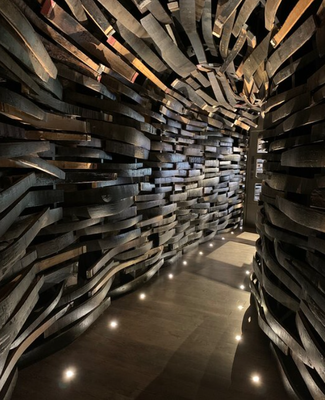 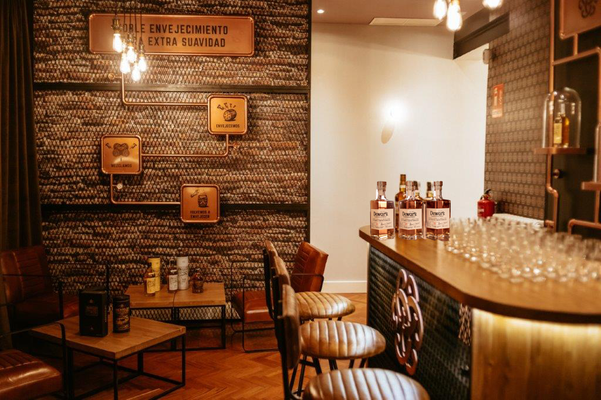 Before talking about and tasting Stéphanie J. MACLEOD's "DOUBLE DOUBLE", I would like to take you back in time to the DEWARS company.

Back to the middle of the 19th century (1846 to be precise), at a time when one could believe that all whisky lovers are called John (!!). A certain John Dewar starts selling spirits in the city of Perth (barely 10 minutes away from here). The business was quiet but still flourishing. After 1868 and the liberalisation of sales and especially the authorisation of the creation of blends (the Spirit Act), the whisky-loving man started to create blends. A success.

In 1879, he integrated his two sons in the business. The first one is called John Alexander (like all good whisky-loving John's sons) and the second one Tommy. The company JOHN DEWAR & SONS was born and the three rings of the logo were linked (in the name of the father, the son and... the son). Not for long, unfortunately, because John (the father) died the following year. In short, the two brothers are at the helm. A whisky lover and a salesman. What could be more practical than a team! This was the beginning of the company's take-off.

One will develop the production and the other will make it known !

To develop it, Alexander hires a master blender (A. J. CAMERON) and even opens a distillery (the one we are in now) for self supply. Before this creation, the main supplier was the local Auchnagie distillery (if you have a bottle of it, keep it well under your elbow because it is closed since 1912). The arrival of this master blender is important, because he is the one who set up the DOUBLE AGED process (ageing of the single malt and grain singles separately, then ageing of the blend in a final cask). And it was at this time that the famous Dewar's White Label was created.

The production was there, but it had to be made known. That's where Tommy comes in. First he went to the pubs of London and England, then around the world to promote the brand's products. But where he's good is in the advertising and the stunts. To cut a long story short, DEWAR'S became one of the biggest purveyors of spirits advertising of the turn of the century. Among the advertising coups, we can note the first video advert (see below), the inscription of DEWAR on car tyres in order to leave a trace of it, or the lighting of a whole tower of London in the colours of the brand (if it was already Séguéla given the age of the latter -NDLR-). As a result, the company is becoming more and more known and is developing.

While John Alexander, who became Lord Forteviot, managed to obtain a royal warrant from Queen Victoria (a warrant which is almost continuous until today - see the one of Queen Elizabeth II on the current bottles), Tommy, who became Lord Dewar of Homestall, brought the brand to the attention of the United States by sending a box of scotch bottles to the President of the time (a Bourbon lover because he was American). If you want to know more about Tommy's adventures, it's all told in the book "A Ramble Round the Globe" published at the time (and who knows, maybe it influenced the Who's rock opera?! Or not).

The worldwide commercial development of the company will allow it to go through the Pattison crisis, the First World War, the American Prohibition and even the crisis of 1929 without any problem, and to still delight us nowadays.

On the financial side (I know we are not here to talk about that but to taste whisky but it is important), the family company has been the object of many mergers and takeovers. Nevertheless, there is one (before the current one) that deserves to be mentioned.

It took place in 1925 when the company joined a certain JOHN WALKER & SONS company within the Distillers Company Ltd (DCL) group. You know JOHN Walker and his son JOHN ALEXANDER walker, as here (if you are interested in the story of the long time competitor I had told it in my tasting here - Editor's note). The fact is, the two competitors (which fortunately were not merged to the great luck of the amateurs) were part of the same group for more than 70 years (group which with the liking of the multiple mergers became DIAGEO). Until 1998 when an anti-trust law meant that the company was sold to Bacardi.

The group is certainly "a bit smaller" but it allows JOHN DEWAR & SONS to have access to a large number of distilleries (some of them having come in John's suitcase) : Aberfeldy, Aultmore, Craigellachie and Royal Brackla which joined MacDuff already there. At the same time the company, by joining this new group, benefited from a new head office in Glasgow and even access to a cooperage in the suburbs. 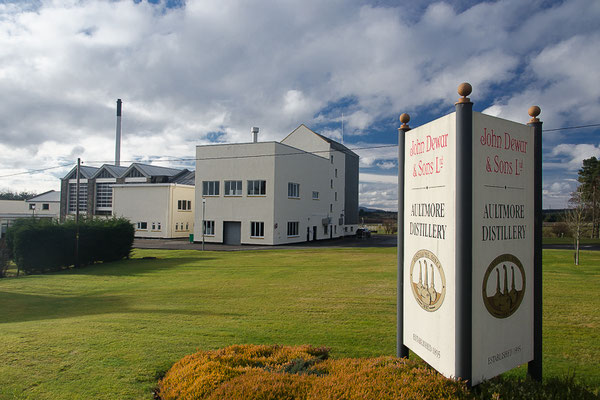 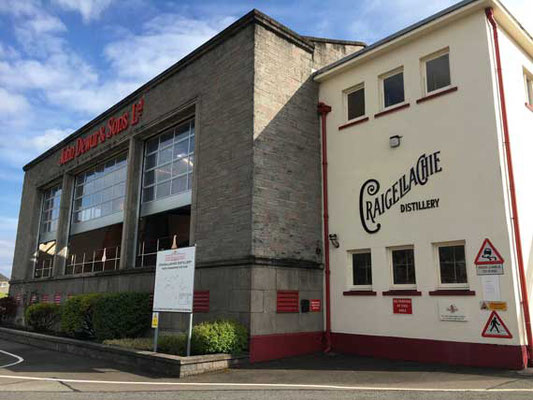 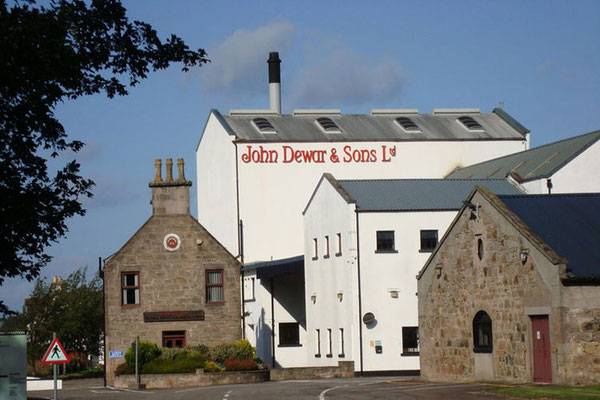 I hope I haven't lost you along the way, because now you'll have to try the "woman smooth touch" and its DOUBLE DOUBLE maturation.

The famous Stephanie J. MacLeod, a former sensory analyst at the University of Strathclyde, who knows all about whisky, wine and cheese, arrived at BACARDI the same year as DEWAR'S. She initially worked in the DEWAR'S quality department, but soon became the brand's Master Blender. Her brief was simple: to be gentle with the gentle (or as the company's first Master Blender did 170 years ago, but even better).

The award of MASTER DISTILLER OF THE YEARS 2019 at the International Whisky Competition (IWC) and her 3 DOUBLE DOUBLES (21, 27 and 32 years old) in the best BLEND in the world at the same competition are perhaps proof that she has succeeded? no?

But what is this famous DOUBLE DOUBLE? It seems so simple that I don't understand why we didn't think of it before!

A Blend is single grain and single malt blends (so far you'll tell me that's a bit normal).

Well, over 21 to 32 years (which clearly gives the wood time to do its job), at DEWAR'S, first of all, the grain and malt whiskies are passed through separate casks. Then the single grain whiskies are blended together and continue their ageing in new casks. The same is done for the single malt.

The two (grain and malt) are then blended into a blend which is again aged in another cask. Finally, the blend is finished by slipping it into a sherry cask: Oloroso for the one we are going to taste, Palo Cortado for the 27 year old and Pedro Ximénez for the 32 year old.

This is the DOUBLE DOUBLE AGED.

So shall we try it?

This blend has seen so many casks that its colour has become dark, almost brown (although when you have it next to its two congeners it is the lighter one!)

When you approach the glass with your nose, you first discover distant aromas of ripe fruits full of sugar. One also detects aromas of chocolate. The first impression is clearly of sweetness ("ultimate smoothness" it says on the bottle).

When the nose dips into the glass for the first time, it immediately detects the sherry finish with marked red fruit notes (such as burlat cherries ready to burst) accompanied by spices (like pepper). The big heat it gives off is more reminiscent of a sherry bomb than a blend!

On the second pass, the heat fades and leaves a little more room for the fresh, lemony aromas of a grain whisky. This lemony side is combined with a woody side (certainly linked to the large number of casks blended, the Olorosso sherry cask having been more discreet).

The third passage is completely mellow and marks the return of ripe fruits and spices at the end.

In the palm of your hand you can smell the peat smoke (which you would not expect) and the smell of empty casks.

Overall, one recognises the sweetness of DEWAR'S, but in a more sophisticated way. Here, despite the age, the passage through many casks does not seem to have altered the strength (as it could be the case in a whisky over 20 years old). Note however that it has been bottled at 46% alc/vol, 6 points higher than other DEWAR'S. In any case, the DOUBLE DOUBLE method is far from smoothing the flavours, on the contrary.

This Blend (which I'm calling it here because that's what it's really called, but which reminds me more of a single malt) makes a much more fanciful entrance on the palate than the nose was preparing for.

A wave of spices (pepper and cinnamon) breaks through. However, it quickly rounds out to leave much more room for a mellow and honeyed texture (very sweet on the ripe apple). But the spices have not said their last word, they remain lurking in the background along with their buddy the woodiness and its mate the harshness of the successive casks.

Nevertheless, at DEWAR'S, the sweetness is stronger than anything and sweeps them away with fudge.

While the middle of the tongue is bathed in a mellow peach skin texture, the 21 seconds of tasting ends with the pepper returning with a bang to the edge of it.

I find that the addition of water is not necessary here for the smell as it does not add anything except smoothing the aromas (which deserve to be deciphered individually). On the other hand, it softens the taste and makes it even more mellow: a touch of spice on cotton wool.

Once swallowed, the finish is relatively long, first of all on the grain, spices and liquorice stick. It then continues for a long time on the smoothness.

What a beautiful journey, I understand that it seduced the IWC jury.

Before continuing my journey for new adventures, I see in a corner of the bar, a golden bottle of 15 years old "THE MONARCH"! I've heard great things about it and it seems that it's another great success of Mrs MACLEOD! I'll have a look at it, I'll tell you about it next time.