We hadn't been back to see Christophe Dupic since the tasting of his HSE finish whisky (see here the tasting), but as part of a tour of organic and terroir whiskies with my van, it was impossible for me not to make another trip to Lorraine, the land of mirabelle plums and whisky.

I had to go back with BRAD PEAT to the village of Rozelieures to taste and compare the first two parcel whiskies of the brand: Le Rozelieures Parcellaire "Thiachamps" and "Le clos des champs".

The charming and quiet Lorraine village of Rozelieures, above which stands a chapel and a Maison de la Mirabelle, is above all home to one of the first French whisky distilleries (which was founded more than 20 years ago).

But what we are rediscovering today is that it is not only surrounded by Mirabelle plum trees but also by plots of barley (18 of which belong to the GRALLET DUPIC family of farmers). In this ancient volcanic region, these plots are either silty (in the south-west of the village), clayey (in the west), clayey-limestone (in the north) or even volcanic (in the south).

With such a varied selection of land that this farming family has been cultivating for a long time, and with proven experience (both as a farmer and as a distiller), Christophe DUPIC said to himself "but why not become the first distiller in the world to offer a whisky made from the barley seed to the drop of distillate?  The idea of parcels was born.

So what is the Parcellaires approach? Well, simply, like Burgundy wines and their climates, we are going to have an integrated and traced whisky which will allow us to produce a whisky limited to the production of barley from a single field (and as we have seen, there are 18 fields).

But in fact, the parcel-based approach, which promises great achievements in the next 7 years (at the rate of 2 or 3 releases per year), goes beyond the "simple" traceability between barley fields and bottle, it is also the result of a total vertical integration of the production of its whisky (which even goes as far as energy autonomy thanks to a methanisation unit!).

Indeed, already strong in producing the barley for this limited series, the distillery has its own malting plant (Malterie de Hautes Vosges). Moreover, of course the brewing and especially the distillation in the two big stills takes place at the distillery, but at ROZELIEURES, they go even further by offering soon the wood for the barrels that will house the next versions!

If this is not integration and the possibility of traceability. Moreover, the bottles of the series proudly display the three words: FERME-DISTILLERIE-MALTERIE.

For these first two limited series, Mr. DUPIC has chosen to use, in one case, barley sown on clay soil (TIACHAMPS) and, in the other, on loam soil (LE CLOS DES CHAMPS). The objective here is to obtain a round and fat whisky in the first case, and a more floral and vegetal one in the second (we will see below if this is the case). 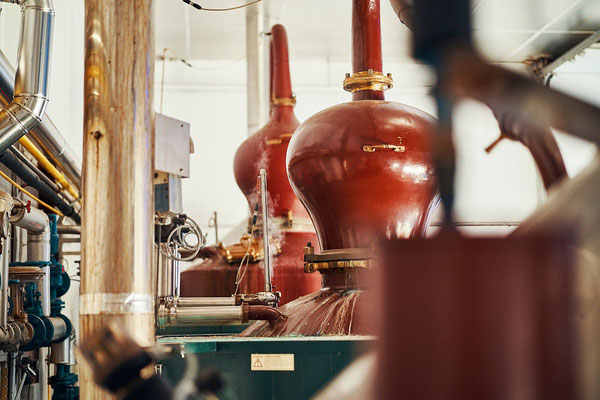 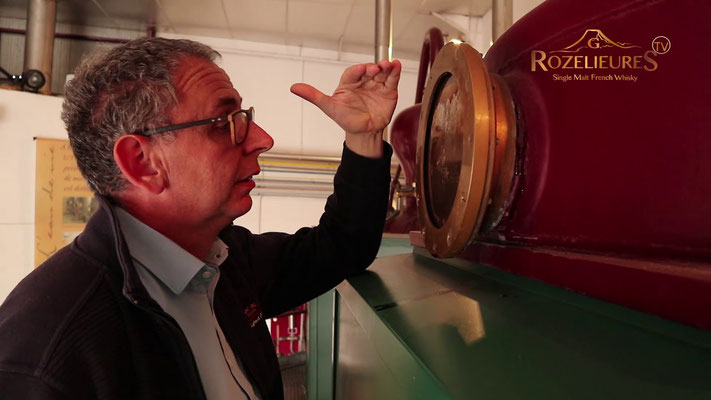 Before going on to the tasting, let's have a look at the forces at work. First of all, in order to push the approach of the soil differential as far as possible, the two distillates of the first series come from the same barley (Etincel) which was sown in September 2016 for the winter season and harvested in June of the following year.

In the western corner of the village, we will find the Parcellaire "Tiachamps" distilled in July 2018 from a barley sown on clay soil. Once distilled the elixir spent 3 years (to be checked) in ex-cognac barrels and new Lorraine oak barrels.

In the south-west corner of the village, we will find the Parcéllaire "Le Clos Des Champs" which was distilled in May 2018 from barley grown on loamy soil before being aged for 3 years in ex-cognac and ex-bourbon barrels. 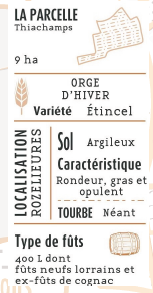 Let's move on to the tasting to see if the impact of the soils plays a role.

The colour of the two distillates is quite close to each other. It will be golden and very slightly coppery. No difference at this level.

At first, the nose will discover a smell of barley and straw but also a mix of ripe and sweet orchard fruits (apple, pear, Reine-Claude). One can detect some distant spices by lingering in the glass.

In the second passage among all these fruits, the ripe pear (which for me is the "Rozelieures signature") stands out. However, the warmth of a hint of barley will be present.

The third part of the nose is a little more tense (youth of the distillate) and will go on the encaustic bringing a certain freshness.

In the palm of the hand, the nose is clearly barley and straw.

The nose of the Parcellaire "Clos des champs" is much fresher.

The first nose is more directly on the "Rozelieures pear" and also has a hint of straw. It is fresher and more floral than the "Tiachamps".

On the second pass it becomes fatter and more sweet. The pear is still there but even more ripe than the first case.  It has a hint of almond. It is less spicy than its counterpart but nonetheless lets out notes of pepper in retro-olfaction once the nose is out of the glass.

On the third passage we detect a hint of smoke at the end but it seems to have a slightly less marked olfactory imprint than the first.

In the palm of the hand, it will leave more vanilla and chocolate notes.

Let's have a look at the two to see what separates them.

The "Parcellaire TIACHAMPS" has a clear "Rozelieures" pear flavour on the palate. It is dense and thick. First of all, we detect peppery notes, then well-marked mixed spicy notes.

Then we note the arrival of fruits, a hint of grape, but also a little bit of harshness at the end (certainly linked to the cognac barrel). This is a pastry whisky that intensifies as the tasting progresses. It leaves a touch of harshness on the front of the mouth but is only velvety in the rest of it.

Once swallowed, it has a long finish. It has a velvety feel in the throat and a hint of the harshness of the wine barrel.

The empty glass will leave a scent of straw and peach.

For me, the "CLOS DES CHAMPS" is quite diametrically different (validating the impact of the soils).

It is much fresher in the mouth and fills it up faster than its colleague.

On the other hand, I find a hint of lemony bitterness absent in the "TIACHAMPS" and a more marked harshness of the cognac casks than in the previous one. These two impressions remain on the palate for quite some time.

It is very vegetal and almost tense (for my taste). This tension has for me difficulty in rounding off and will even generate spices that are more marked than the previous one. Perhaps it deserves a longer stay in cask. At the end, however, it softens towards cinnamon and chocolate.

Its woody and fresh finish is moderately long. It will leave peppery notes on the palate.

The objective that Christophe DUPIC set himself seems to have been achieved. There is a very clear difference between the two distillates, possibly due to the aging chosen, but more importantly clearly linked to the soil where the barley (similar, let us remember) was planted.

Personally, for the same price (73 € for only 2000 bottles) PEATDREAM would have a big preference for the first one, the "PARCELLAIRE TIACHAMPS".

If you are looking for these two limited references, run quickly to the DUGAS website

There will not be enough for everyone!