Nowadays more and more distilleries are integrating the environment into their production process.

It has been known for a long time that draffs are an environmental treat for cattle in distilleries, but more and more a broader ecological approach is integrated in the production of spirits.

Today we're going to taste the most organic of the organic: NC'NEAN.

Whisky barons like ABERLOUR (already at the forefront in terms of water purification since the 30's) favour the short circuit supply. In addition, younger distilleries like ARDNAMURCHAN (from the ADELPHI group) and Dalmunach (from the Chivas brothers group) will use entirely renewable energies (hydroelectricity and biomass boiler), for the former, and high efficiency equipment to save money for the latter. In France, too, distilleries such as Domaines des Hautes Glaces and Distillerie du Vercors, or, in Ireland, Waterford produce from organic raw materials.

Nevertheless, few distilleries are positioned as 100% ecological distilleries and do not claim to have any carbon impact like the one today.

In Scotland, a newcomer on the west coast has made it its "workhorse" since 2017: it is the NC'NEAN distillery (pronounce it the way you want - but a priori it is Nec-ni-an in French). We will taste the BATCH 3 today.

To reach the distillery, the road is not the easiest one. Indeed, the distillery is quite secluded on the west coast of Scotland, on one of the banks of the sea which separates the country from the Isle of Mull (home of TOBERMORY and LEDAIG which we had the opportunity to introduce you to many times). In order to honour Dame Annabel Thomas, mistress of the place, I choose not to play too much provocative with my backfiring combi (sorry BRAD PEAT, today you're staying at the port) and reach the place by bike!

It is thus by a beautiful coastal road that, skirting on one side the strait and on the other the forests, I start my journey. Almost arrived at Drimnin, I leave the road and enter the forest on a dirt road. It is increasingly dense and dark. The tradewinds slip through the trees and sometimes give the impression of hearing whispers in the trees. Weird and not the most reassuring!

After a while, the life of the forest seems to give way to more clarity, clearings and houses! A sign finally confirms it, here I am in front of the towers of the NC'NEAN "castle" distillery! The least we can say is that making organic rhymes here with not being in town!

Once there, I meet Annabel Thomas (a former Londoner who left the hustle and bustle of the English capital for the green Scottish countryside).

I tell her about my journey and about the sounds of the forest. Without any surprise, she tells me that it is not the wind but that it is simply the goddess Neachneohain (also pronounced Nec-ni-an in French) who, as a good queen of the place, watches over the spirits that live in the woods. She also tells me that it is in her honour, and because she is a fierce protector of nature, that she chose to call the Organic distillery like this (ah also it seemed to me !!).

The view from the distillery is magnificent. The island of Mull is fully revealed.

Even before entering the premises, I realise that a special place is given to the owners of the place: the two stills. Indeed, these two coppery chubbies spend their days admiring the landscape behind their glass windows.

The central theme of the place, whisky (and gin -NDLR-) rhymes here with the protection of the environment and the wish to have the lowest possible carbon footprint. Before I even start the visit, I realise that Annabel and her team seem to have a lot to say about ZERO CARBON EMRUNTE (fortunately I came by bike!).

She starts by showing me the natural reservoir next to the distillery. She tells me that it has been created to collect rainwater (it doesn't rain too much in Scotland) and let it cool down naturally so that it can be used in a closed circuit for the distillate coolers.

On the way back to the distillery, she tells me about the distillate water which comes directly from the local spring.

Once inside, as we make our way to the production room, time seems to slow down strangely.

As Annabel is about to tell me about one of her prides (her beloved yeasts), I tell her how I feel. She tells me that this is normal, as the time here is adapted to the very long and slow production cycle. Indeed, to produce her distillate, she has chosen to mash her barley, well rested, slowly, to let her beers ferment for a long time (114 hours) and even to extend the distillation time as much as possible to obtain the purest distillate. A fine philosophy.

In front of the two whashbacks, she then tells me about the long and tedious analysis work she did with Dr Jim Swan (a chemist and biologist who was part of the original venture but has since passed away) on the yeasts she uses to produce her juice (in order to get the tastiest beer).

She leaves me in the hands of Gordon Wood, the manager of the distillery, who shows me the two stills of the house. With their swan neck, which makes them look like normal stills, they too have been put under the ecological knife.

Indeed, they draw their heat from a biomass boiler (which uses wood residues as fuel) which is clearly the pride of the place. In addition, the one that heats here uses wood chips from the surrounding forests (a short circuit) with a principle of one tree cut, one tree planted. 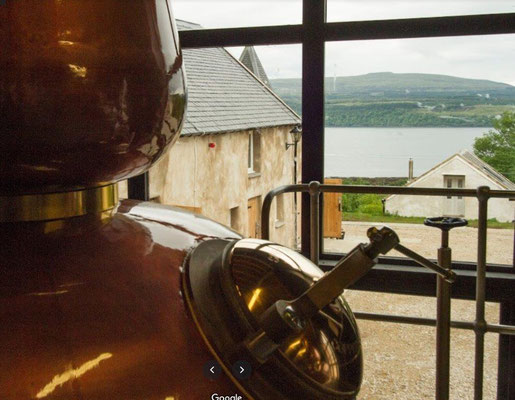 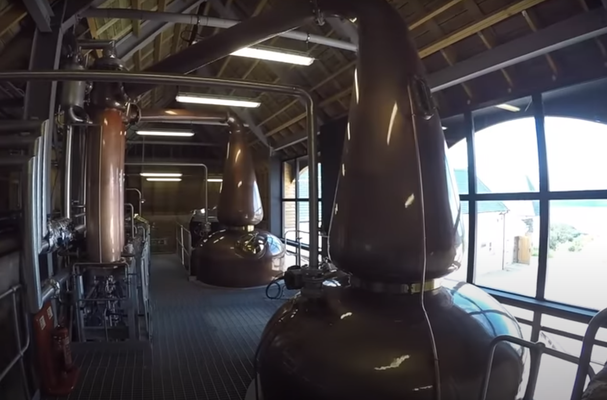 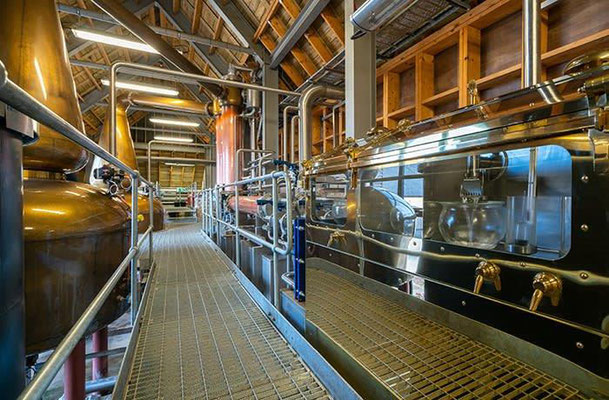 Gordon is going to tell me about the barley used here. It is, of course, organic and Scottish and has been chosen for its limited yield but greater flavour. He seems disillusioned when he tells me that the terrain of the region and the local humidity do not allow them to grow it locally, and force them to resort to 10 producers (eco-sustainable of course) from the east coast.

But he immediately reassures me that there is compensation to reduce the carbon footprint of their transport. He then tells me that of course (one would have thought) the production residues end their lives either in the neighbouring fields as fertiliser (for the liquids) or in the bellies of the local cows (for the spent grain).

He then accompanies me to the warehouse where barrels of different sizes are sleeping: Ex bourbon, red wine and even sherry. There too, he cuts me off (as they say, even if it's not very ecological), he tells me that there too, there is carbon compensation.

He tells me that these casks, which are scraped (to remove the residue of red wine and give it an impact close to new but with a vinous base), toasted (toasted with chips) and then re-burned (to release the maximum of aromas), allow the distillate to benefit from a double ageing between a wine cask effect and another new cask (woody and spicy).

Obviously there's no need to look here, we're ZERO IMPACT (NET ZERO as they say!). He even ends up telling me that the bottles, which look more like fashion designer bottles than a simple whisky bottle (note by the way that the said bottle has just been awarded a prize at the IWSC for its design), proudly display the term ORGANIC and are themselves made from recycled glass. I'm not talking about the graphics, the label, the glue, which are also eco-responsible, but here we're even pushing the thinking to the point of having a different price depending on whether or not you take the tube that comes with it!

So that's all well and good but what about our BATCH 3 of the day?

This distillate is part of the distillery's 8 batch range. Indeed, after a first and very limited AINNIR, there were 7 batches produced between 2017 and 2018 which were released from 2020 (at their 3 years). Note that as you read these lines, a mysterious newcomer, QUIET REBELS is positioned on the shelves of wine shops (notice to those interested here).

The N°3 we are about to taste dates from the summer of 2017 and was bottled after spending a little more than 3 years in the famous STR red wine barrels (majority) or in bourbon barrels.

When the nose dips into the glass, it will discover sweetness and fruit. The aromas will be very fruity and fresh, almost medicinal.

At first, without any aggressiveness, the nose reveals notes of orchard fruits (pear and peach). By insisting on this sweetness, the aromas become sweeter and sweeter with even a hint of strawberry tagada at the end.

In the second passage, the freshness remains with a smell of star anise and a smell of peppermint on a barley background.

On the third pass, a hint of sulphur and sweet spices can be detected if one insists in the glass. Paradoxically, the signal to launch the tasting comes with a hint of warming at the end with the smell of vanilla cake at the end.

The predominance of wine barrel ageing is not the most marked except at the end. Perhaps the STR method deserves a longer passage to mark the distillate with vinous notes.

Surprisingly enough, in the palm of the hand, one can detect a hint of smoke and rubber behind the barley (certainly linked to the two cask heats).

When it enters the mouth the NC'NEAN distillate is fresh, and a little more marked in alcohol than the nose would suggest, but it remains quite sweet.

Quite quickly one notes on the tongue the arrival of spices that were very discreet on the nose. It gives a soft velvet sensation in the mouth.

It then reveals more pronounced notes of green wood, which confirm its floral side but also betray its youth. At the end of the tasting, it warms up, becomes "honeyed" and here and there reveals hints of liquorice.

The finish is moderately long, with woody and fresh notes, with the remains of cinnamon and liquorice more persistent than the others.

The empty glass remains fresh and clearly focused on barley and an "agricultural" side and a hint of peach (which is quite persistent over time).

This whisky is a nice surprise of sweetness in a world of brut. It will certainly deserve some time to let the STR wood express itself fully, but it augurs well for the West Coast of Scotland. In addition, it can't hurt that it is completely ORGANIC (and therefore good for your health).